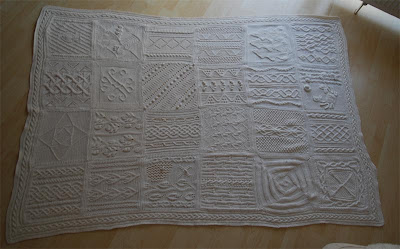 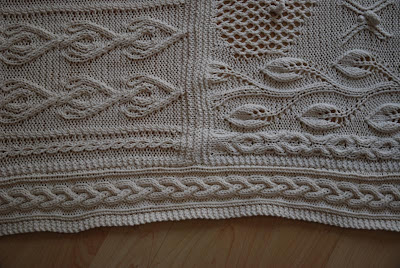 For the border I've sort of made up my own thing, though the braid is based in part on one of the existing squares. It was six meters of that border and in the end I really had to force myself to push on to finish it. But the result was so worth it! 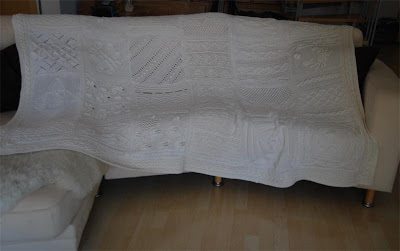 I bought in the beginning 37 balls of the yarn I've used and I used every single one of them. I've got maybe half of one ball left, so I couldn't be any happier.

Even though it was a rather long project (though, of course, I didn't work on it continuesly) I really enjoyed it. There was a lot of different styles and ideas to try out and I learned a lot of different techniques. Some squares have been knit from inside out or outside in, diagonally across or in stripes and then joined again on the go. Some have been plain cables, others are more visual (I'm quite fond of the crab or the fish). There was entrelac, ablique, acorns and trees, bobbles and leaves. Some turned out bigger than planed, some had to be blocked within a inch of their lives to fit (more or less)
Each square contains some fond memories for one reason or another and (except for the border) it really never got boring.

I know it's not a perfect afghan and I wouldn't win any prizes with it, but I loved doing it and I love having it.

(and I found out that taking pictures of something mostly just off white is a pain ... sorry for the bad quality)
Posted by Sapphire at 7:45 PM No comments:

The Fun Of Throwing Things Into The Washing Machine 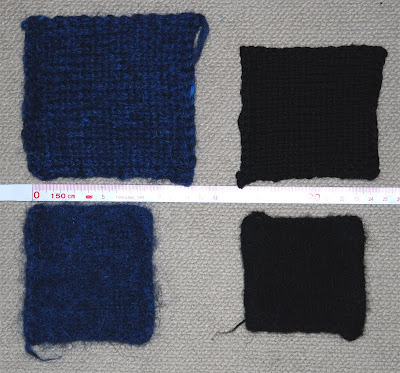 The top part is the original swatches. Left side is some unspun Icelandic wool (held double) I've bought in a super market in Reykjavik, on the right is Cascade 220

Step 3: admire how much the swatches have shrunk 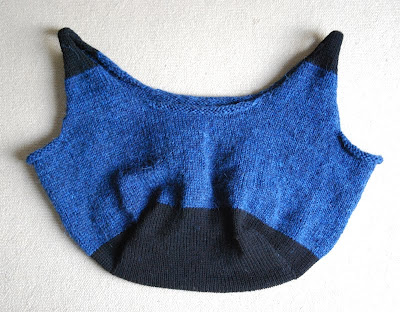 The pattern is the French Market Bag from Knitty Winter 2003

Step 6: drink something strong, or pray - whatever works for you 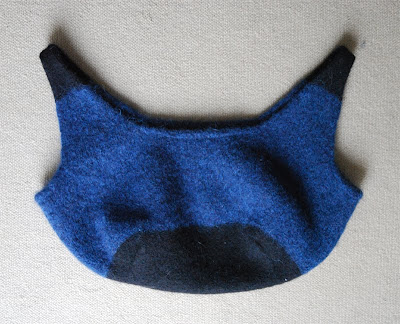 Step 8: put yarn for your next project into bag 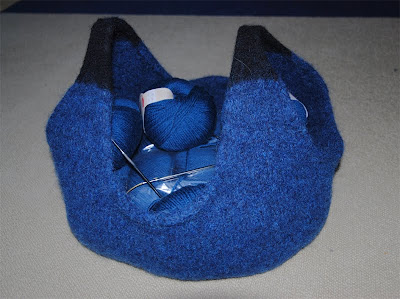 Posted by Sapphire at 6:26 PM No comments:

I'm not a big fan of stranded (fair-isle) knitting. Whenever two colors come into play I have a problem. But once in a while a pattern comes my way that I like so much I have no choice but to knit it, and my fear of stranded knitting be damned.

One such pattern is this one: 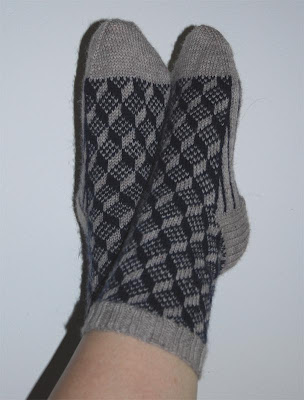 It's called Route 66 and is in the book 'Socken aus aller Welt' (socks from around the world) by Stephanie van der Linden. Stephanie has a lot of really nice sock designs, and her book really got me in to the mood for sock knitting again. 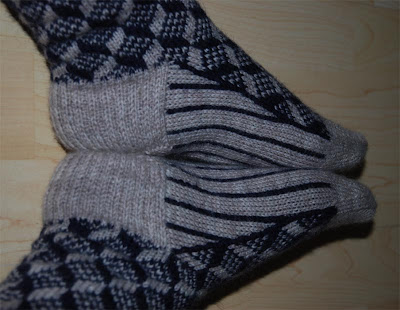 Another sock (singular as in ONE sock) also started out as one of her patterns names 'Metropole der Mode'. This is a sideway constructed sock and as I saw she used some new approaches (well, some I haven't seen so far) I though to give it a shot.
I didn't like it a bit. For once, the sock was way too big (like five sizes too big). The leg part was super long, and due to the nature of the beast, the cuff is so tight it would hang around my ankle most times. Still, I like some of her ideas, and decided to combine her pattern with another pattern from another book, namely the 'Two-yarn resoleable socks' from the 'Favorite Socks' book. 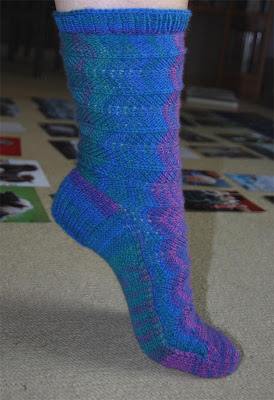 So, I started out knitting sideways, and when I reached the part where the heel starts I left the foot stitches resting and knitted only the leg part. This leads to a slightly deformed 'L' shape in the end. I then closed the leg to form a tube and picked up the stitched for the heel. I did a standard turned heel and then started to knit the sole, joining it with the upper foot as I reached the end of each row. In the end I knitted the normal toe and also knitted the cuff. 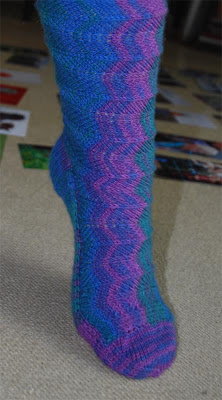 I do like the sock - sort of.
The foot fits perfectly and I really like how the colors go with this.
What I hate is the fitting of the leg - the cuff is so tight, it's hard to believe I got it as high in the photo shoot as I got. If I do this again (and I might ...) I do it even shorter, at least another 10 stitches. But for now I leave it at rest and won't knit a second one in this color ... the yarn has already gone on to another project ;)

Yesterday the newest knitty came online and I fell in love with a pullover there: Margot. Simple, classic ... I bought already wool for it.
Posted by Sapphire at 5:07 PM No comments:

The Art Of Blocking

When you knit lace and you're done with it (or actually, already in the middle of knitting) there always will be a point when you ask yourself what the heck you've knitting and WHY?
Because, when you're done with your knitted piece of lace it usually doesn't look very nice 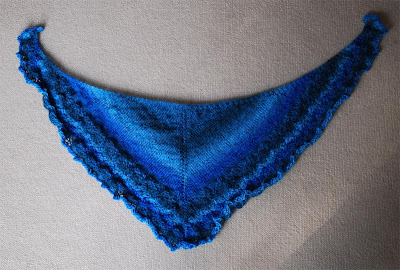 See here. Just some squnched up piece of fabric (and I know there's not such word as 'squnched', but I sort of like it, so it stays)

Then you drown your work of the last weeks into water and queeze it out very carefully and then you pull out your blocking boards / old couch / bed (or, in my case, some foam puzzle mats) and, using a gazillion pins, you begin to stretch your fabric out and pin it to the board / couch / bed / puzzle mats. 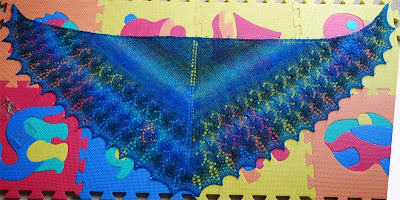 And a few hours later, when you take it off it will have transform as if by magic. 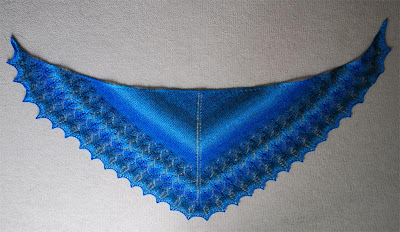 Magic, I tell you. 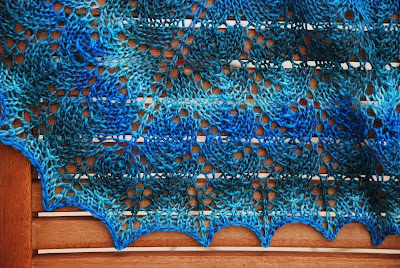