I'm currently knitting a small shawl (Coquille Shawl). The pattern says I would need about 370 meters. I've got 420 meters (one ball of Crazy Zauberball in blue/green/gray), so I'm okay.
Of course, I wouldn't write about if this would have been no problem.
I noticed fairly early on that it might be a bit tight, that there's wouldn't be much yarn left over once I'm done, but I've plowed on. I just followed the old maxim that if you think you might not have enough yarn, you just knit faster. So you'd be able to finish before the yarn runs out.
Of course, this doesn't really work, and I got the point where I've got about one repeat of the pattern to do and still 30 stitches on the needle when the yarn ran out.
Sigh.
So, the only thing I could do really, was to rip the shawl back up until about half way point, take out one repeat there and start again working my way back to the end.
Luckily it's a rather fun pattern and the changes in the yarn also keep it entertaining.
Hey, the way I see it, I'll get about 50% more knitting enjoyment out of it than if I'd finished it already.
Right? 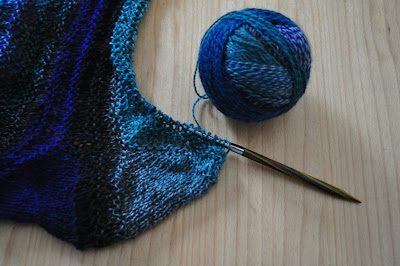 At least that's what I've been telling myself....
Ah, almost forgot, I've got my computer back. They just reinstalled win7 and sent it back. Naturally, now I wonder if the next time I need to do a recovery I'll end up with exactly the same problem.
I've got a lot of data in the backup, but I still suffered a few losses. All the pictures I've took between May and September are gone as I stored them on a different partition of the hard disk which, as it seems, had not been backuped. Luckily nothing really important, but still it sucks.
Posted by Sapphire at 4:53 PM No comments:

Internet is very dodgy right now, so this will be short.

Computer update: the new computer is at the computer doctor to be fixed. Careful estimate is three to four weeks.

On the old computer, the internet is not working well. It's okay right now, but I don't know for how long. (Well, it didn't last long ... I hope this can get out, but I'm not holding my breath)

To lighten my mood (and because we bought tickets weeks ago) a friend and I drove to Backnang, a small town close to Stuttgart, in order to knit. It's the second annular German Ravelry Meeting and hundreds of ladies (and a few brave men) came together to talk about yarn, pattern and techniques. And to oogle the lovely yarn on sale. 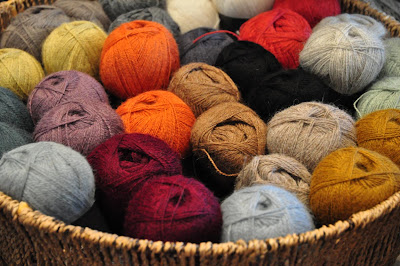 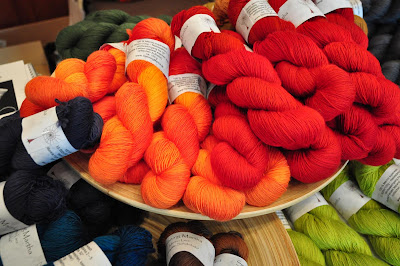 There was a lot of it. Even a pool full. Takes the term 'stash diving' to a whole new level. Some lucky ladies got the opportunity to fill large bags with that yarn, but sadly not me. 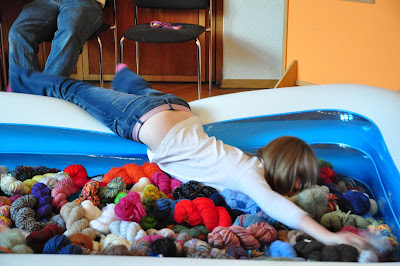 Instead, I took those home with me: 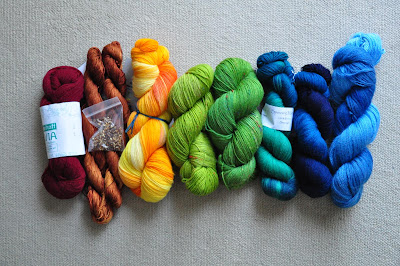 From left to right:

Posted by Sapphire at 4:58 PM No comments:

My lovely new computer died on me yesterday. It started out small, with it wanting to dial up the internet and I'm telling him that with the new router it didn't need to do that. I've got the new router for two weeks now and even though the computer insisted once or twice that it wanted to dial up, I usually just cancelled and the computer accepted that. No problems with getting into the internet either.
Now, yesterday it didn't accept it, so I do my usual thing, which is to power the computer down. It will be fine once it's back up, right.
Wrong!
As I boot up again, it suddely insists to do a recovery and format the hard disk.
Aaaaarghlll!
Still, no panic yet. I have a back up, so once windows is installed again, I'm fine.
Wrong again!
The coumputer does the install, everything seems to be fine but when it reboots again, eventually I get a 'configuration error'.
Just that, a 'configuration error'. And, at the end of the text, which instructs me to call service (which, as it's Saturday is no answering the phone ...) the message 'code purple'
What the f*** is a 'code purple'?

Long story short, my new computer is dead, Jim, and I'm back to my old one, which I luckily have kept around.
This one, surprisingly, doesn't have any problems with the internet. At least I've got that.

Good thing I don't have any pictures anyway. I'm focusing on a big, secret project right now, which, because it's secret, I can't show right now..
Posted by Sapphire at 2:28 PM No comments:

I know, I know, winter is still a good way away (luckily), but then one can never start early enough with winter knitting.

So, my first 'wintery' project are the Sourwood Mountain handwarmers (or fingerless gloves) knitted in some leftover yarn from the brown cardigan I knitted May 2009. 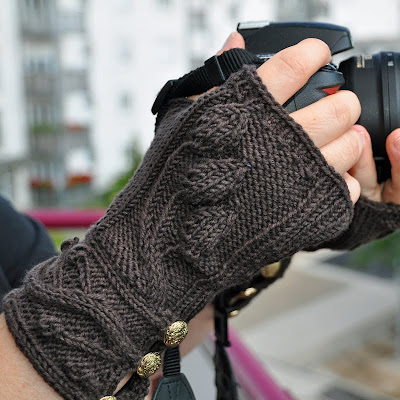 I also finished the Shaelyn shawl in Jawoll Magic. I hoped for seven repeats of the pattern, but ran out of yarn about two rows from the end, so I improvised a bit. I don't think it hurt the project though. As a shawl it's a bit on the smallish side, but I think it should still do the job. 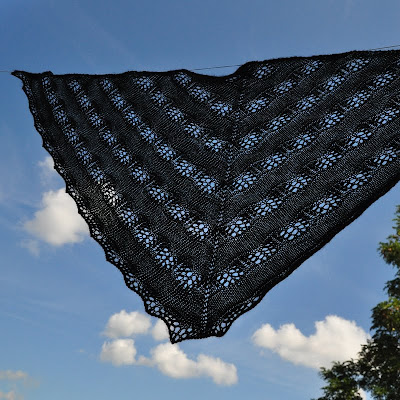 Colors are a very dark blue/grey to a nice mid blue. 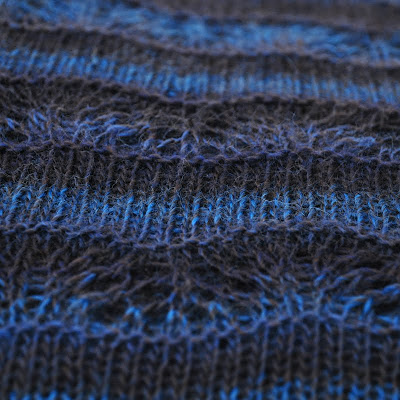 Posted by Sapphire at 1:52 PM No comments: