Yesterday was the 50th anniversery of the british TV SciFi show 'Doctor Who'. Being a bit of a SciFi geek, and having friends who are in the same boat as I am, I knew of course about Doctor Who for quite a while, even though it had not been on German TV until a few years ago.
To celebrate the anniversery, the BBC did something I've never heard of before, which is they showed the 3D anniversery special ('The Day Of The Doctor') in cinemas all over the world simultaniously (the largest simulcast of a TV drama ever).
So yesterday, at the same time the UK got ready to watch the show, I was gathering with a whole bunch of fans in a movie theater in Frankfurt, waiting for the show to begin. 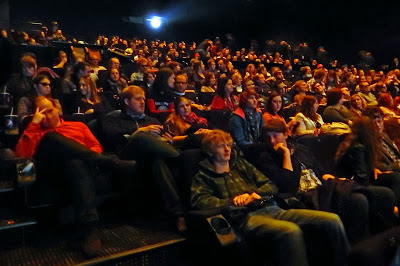 This is a large room and it was practically sold out.
Some came in costumes, so that was pretty cool too.﻿ 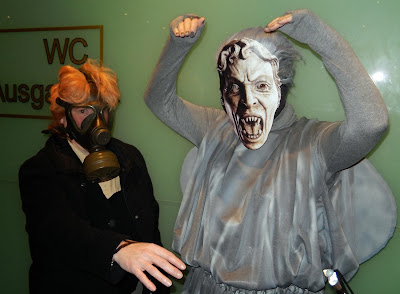 And the anniversary episode was really great and the only 'complaint' I've heard was that somebody said it was too short.
I do agree very much.
Posted by Sapphire at 5:22 PM 1 comment:

We are living in a plastic world. Wherever we go, whatever we do, we are surounded by plastic. And, for quite a few things this is okay. But sometimes, not using plastic is maybe a very good idea. Like when going shopping. Why take a plastic bag in the shop, which ends up in the trash, when you can bring in your own re-usable shopping bag? It's really not a very difficult thing.

A friend of mine recently bought a couple of old coffee bags. And last weekend we went and made chic, ecological, unique shopping bags. 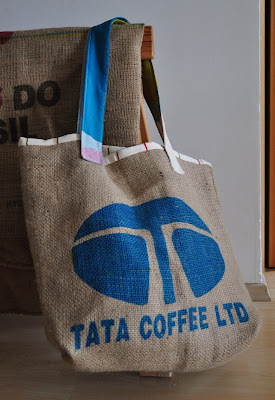 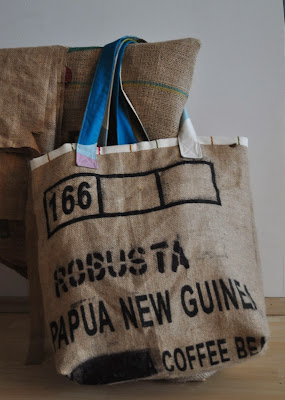 I called dips on the top one (Tata Coffee) 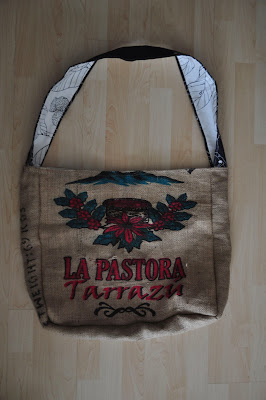 Okay, my sister's birthday was in September so it's a little late, but I was in Canada that time and so her birthday present was a bit delayed. Even though I finished said birthday present already in June. 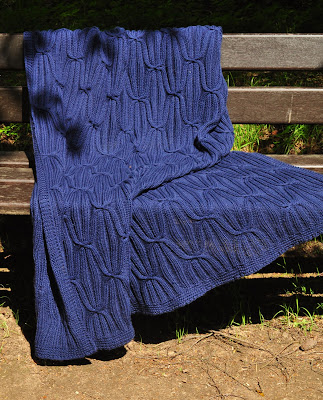 Pattern is the Quilt & Cable Blanket from Cascade Yarn and I used the in the pattern recommended yarn (Cascade Eco + in the color 0515 Navy)
It loved knitting this blanket. The yarn feels really nice and the knitting was 17 rows of relaxed zen, interrupted by 3 rows of full concentration.
Posted by Sapphire at 12:10 PM No comments:

When cutting fabrics for patchwork, it's pretty much inevitable that you end up at some point with leftover stripes of various width and length.
The big question now is how to store them.
A quick and cheap solution is to make large bobbins from cardboard. Mine are about 10 x 8 inches and hold 8 ~ 10 stripes.
I do try to color coordinate them, but that's not always possible. 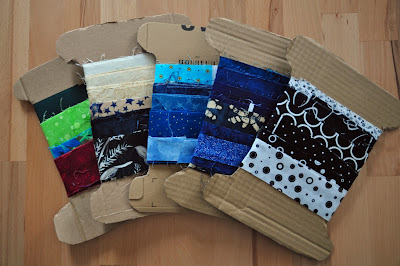 At least now then don't fly around all over the place and when I search for stripes and know what I have.
Posted by Sapphire at 2:12 PM No comments: