In Hessen, my home country, the national drink is Ebbelwoi (Apfelwein, for those who speak proper German, and apple wine for those who don't speak German at all)
So, once a year, the street through my home town is blocked and a carnival is set up.
We have a big Ferris Wheel: 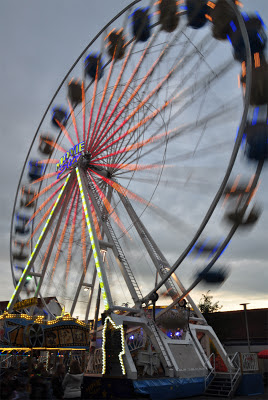 This ride is called 'Tagada' according to Wikipedia. 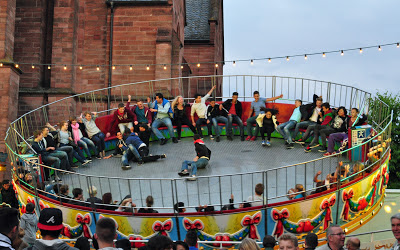 And there was also a very nice Merry-Go-Round (though I have to say, the mouths of the horses look like they are wearing very cheap make-up) 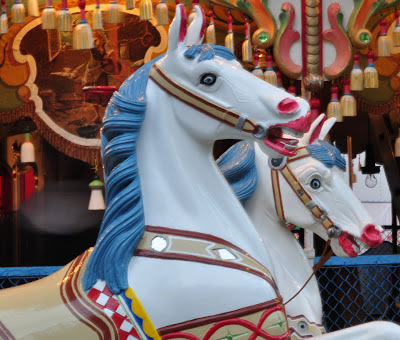 Ebbelwoi was runnig out of the fountain in the center of town and the whole area was dressed up. 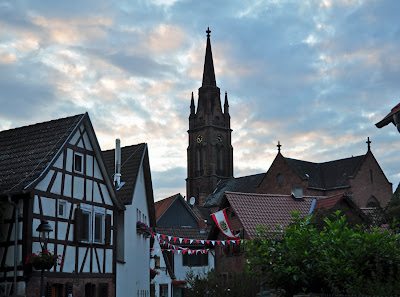 The old town hall of Leipzig was flagged with signs for the Bachfestival that took place this weekend. 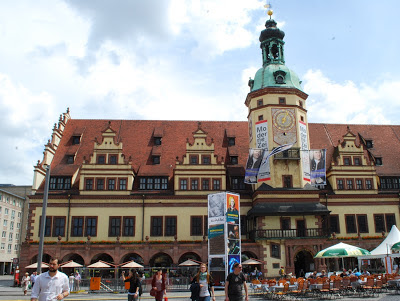 The 'Auerbachs Keller' is the second oldest restaurant/pub in Leipzig and even Goethe has been known to frequent it while studying in Leipzig. 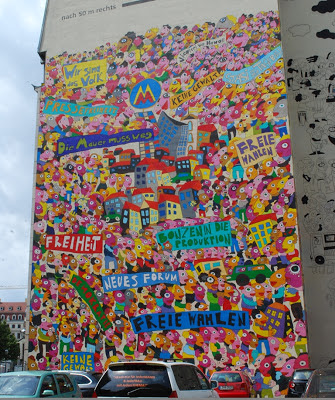 On my way back to Dresden I made a little detour to Castle Colditz. The castle itself has been around for 700 ~ 800 years, but it became most famous for being a prisoner-of-war camp of officers of the allied forces during WWII. Supposingly escape-proof, 31 prisoners actually managed a 'Home-Run' (though most escape attempts were foiled) 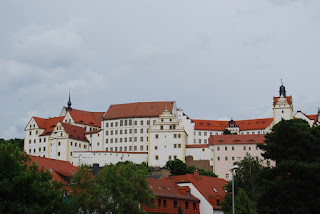 Today, it houses a youth hostel and also a small museum which shows some of the truely inginious things the prisoners came up with is order to excape.
Posted by Sapphire at 10:30 AM No comments:

As I mentioned in my last post, we didn't just go on a cruise, we went on a Quilting Cruise. (*fanfar sounding*!!!)
At our two sea days, we had classes in the on board conference center. Thanks to Pfaff (and Tom and Ian) we had 56 sewing machines set up and Ros and Judy were our teachers.
We started simple with the typical Nordic Eight Pointed Star pattern. It was up to us which technique we used, so I decided to do reverse applique, which I hadn't tried before. I later added the triangles in the corners, sewing them on by hand. I'm not sure at the moment into what to finish this, so it stands like it is for now. 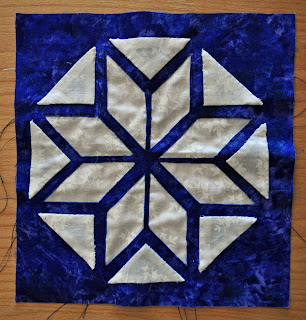 The second class we had was for the New York Beauty Block in Foundation Piecing. I made the basic block first (on the right), then added the little bit more advanced one (on the left)
This has been super fun, and I'm thinking about doing something else in that technique in the near future. 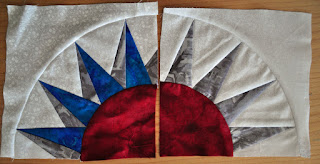 During the week, we had also a few things going on in the evenings, one of them making this pin cushion out of hexagons with the English Paper Piecing method. I finished it at home and stuffed it with scraps too small to use for anything else. It's already been in use. 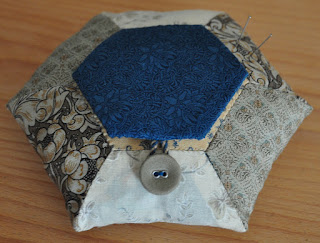 On the last day we finally had something to really use the machines that had been set up for us. We appliqued this landscape (I made a few mistakes there, but well, it was more for praxis, right) then I went a bit wild on all the stitch pattern the machines had to offer. I especially like the little fishes. 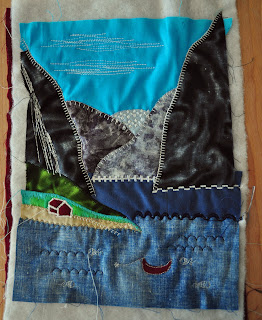 Final class was on Bargello. I did something, but currently I am thinking on making what I have into a little bag, so I'll show you that sometimes later.

I had a lot of fun trying out all those new techniques and certainly found inspiration for new things to do. I would do this again, anytime, anywhere.
Posted by Sapphire at 7:59 AM No comments:

Our cruise took us from Southampton in England through the English Channel across the North Sea to Norway.
First stop way Flåm at the Aurlandsfjord. There we took a trip with the Flåmsbana, a railway line that goes over a distance of 20km to 863m above sea level. It is the steepest standard gauge railway line in Europe and has very beautiful sights to see.
One of the stops is at the Kjosfossen waterfall and just when we stopped there the sun came out and made this beautiful rainbow. 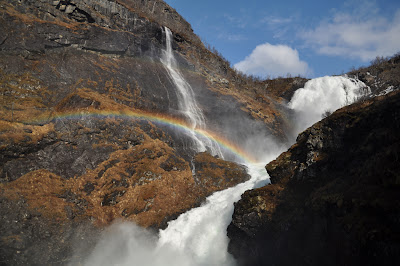 Second stop was Skjolden. We didn't take any of the official trips offered but walked up to a viewing point 120m above sea level. Looking back the Indepences of the Seas doesn't look that big after all. 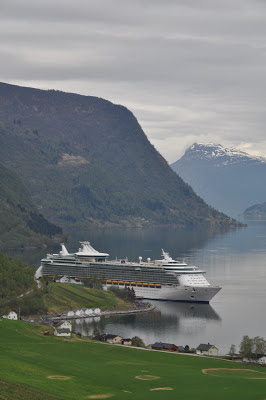 We also hiked to a fantastique water fall (there were lots and lots of waterfalls ...) 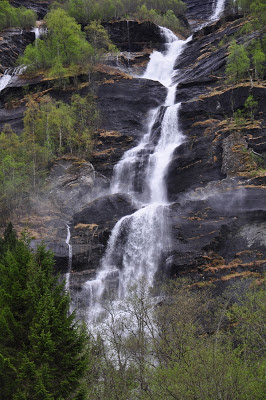 In Olden, our next stop, our weather luck turned and we had rain. Cold rain! The whole time! Still, we did a trip to one of the side arms of the Jostedalsbreen glacier, the largest glacier in continental Europe. 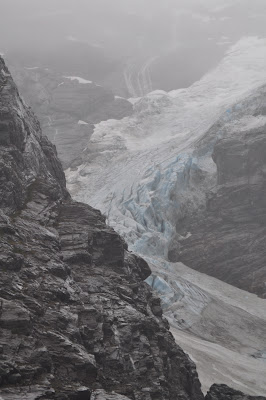 The next day brought as closer to civilization again and to Ålesund. The weather improved and we had great views. 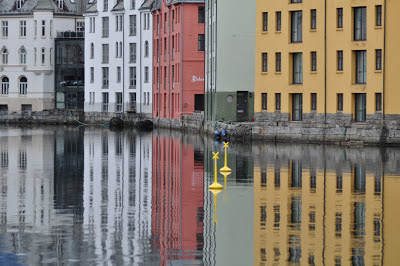 Next and final stop before returning to England was in Stavanger, where we visited the Sverd i fjell monument, three, 10m tall swords rammed into the rock in memory of the Battle of Hafrsfjord (around 872) when Norway was united for the first time under one king. 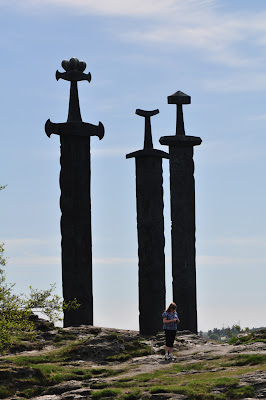 Of course, there was much more to this trip, but I just don't have the room here to show you all of my pictures.
Also, this was not just a normal cruise, but this was a Quilting Cruise, so next time I will show you some of the things I made on the two days we had courses.
Posted by Sapphire at 5:06 PM 1 comment:

Independence of the Seas

The 'Independence of the Seas' was the first cruise ship I've been traveling on, and now I might be a bit spoiled for any other possible cruises in the future.
For once, the Independence is big. Really, really big. 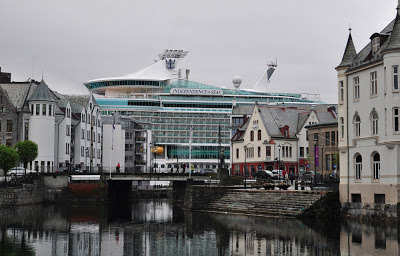 With 3600 passengers and 1350 crew there are also a lot of people on board, but thanks to the size of the ship, you normally don't notice.
There's a lot of entertainment, starting with three swimming pool areas, a rock climbing wall, tennis court, mini golf, theater (with very good  shows twice per evening) 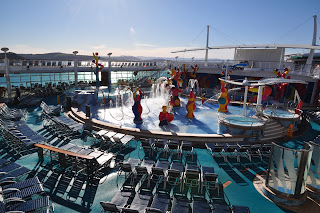 And, of course, there's food. Lots of it and all the time. And most of it also very good (my only complaint would be that there was no decent rolls at breakfast, but that's really nitpicking) 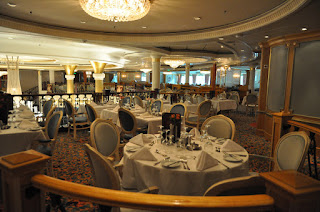 All in all, a very pleasurable way to spend a vacation. 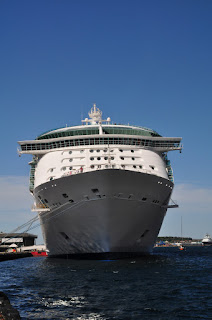 Posted by Sapphire at 9:03 AM No comments: