Call of the Wild

Close to Hanau in Klein-Auheim is the Alte Fasanerie, a kind of zoological park in a natural environment with mostly local fauna. The park was founded more than 400 years ago, though at this time is was not open to the public and instead was used to raise and keep animals the rich and famous could then hunt for fun.
I have some vague memories of going there when I was a kid and I actually believe there is some super 8 footage of me and my family being there, but I think it's been a good 30 years if not longer since I've visited.
I've had a couple of days off this week and the weather was gorgeous, so I decided to pull out my camera and and see if I could get a couple of good shots in. When I was there yesterday I saw that the park also has a falconry which offers shows once a day. As I had no time for it yesterday, I decided to come back today and have a second go.
Before the show you could get pretty close to the birds and they (at least most of them) obliged to pose for photos. 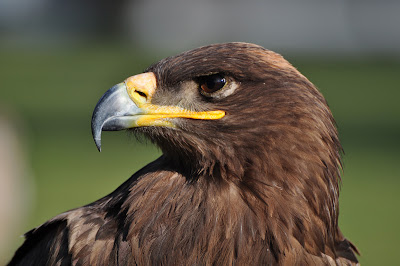 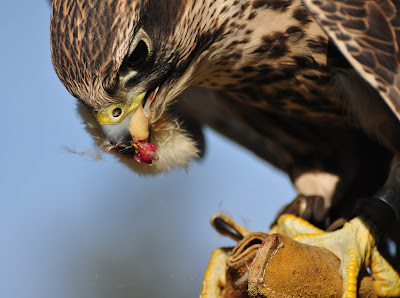 Not for the first time, I realized that getting a good photo of a bird in flight is damn hard. But with a sufficient amount of tries, at least one or two had had to come out all right. 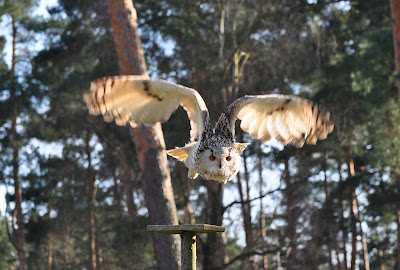 One of the main reasons I went for the park was that I read an article the other day that the wild boar now had their young and if the weather was nice and warm enough, they would get the little ones out. 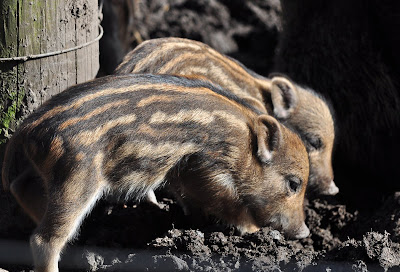 The park also has a group of three lynx. Yesterday they proved to be rather lazy, but luckily today they were far more active (in case you're worried, they one on the right is washing the face of the other one. Really, it was adorable) 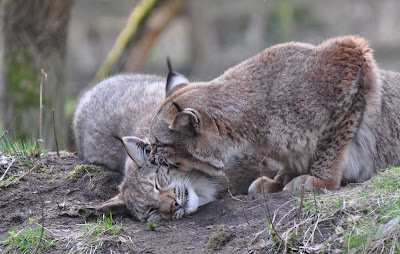 The grooming didn't last long, though and soon they were chasing each other around the enclosure. While I was watching, one suddenly jumped a good three meters up a tree and made itself comfortable up there. 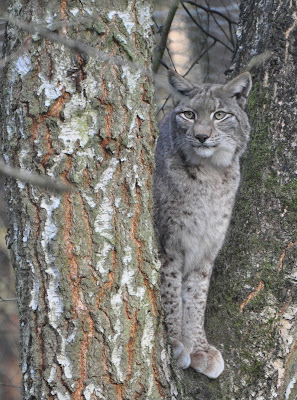 The wolves, on the other hand were not exactly active. But if you look like this one, you don't need to. 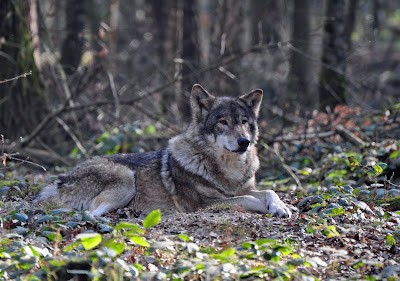 They also have a group of three polar wolves. A lady I was talking to, told me they had a little concert earlier in the day, but in the afternoon they mostly enjoyed the sun and didn't do much. 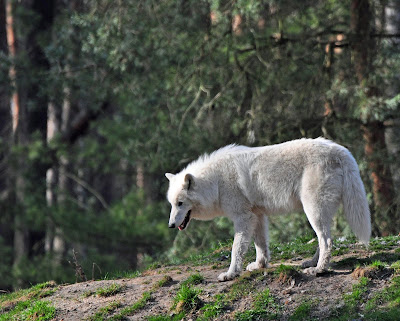 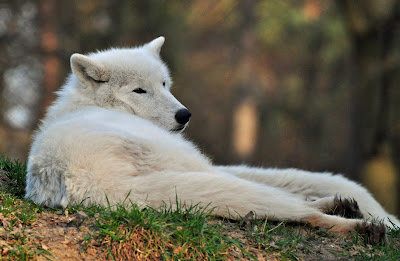 Posted by Sapphire at 8:12 PM No comments:

Search for the Right Angle

Remember one of my Works in Progress from two weeks ago?

I don't have a pattern for the shawl and try to muddle my way to something that looks sort of like what I want.
The problem I have with this is that when you decrease on both sides while knitting stocking stitch, it will not result in a 90 degree angle, in something a bit pointier than I'd like.
Through trial and error (and a little bit of actual thinking) I figured a decrease in every right-side row PLUS a decrease in every third wrong-side row (a total of four decreases in six rows), should get me the angle I'm looking for.
Looks like I've got it sort of right now.

However, as my first attempt (as seen in the previous post) was not what I wanted, I frogged the other side. Not being one to waste perfectly good yarn, I wrapped them all in nice little balls. 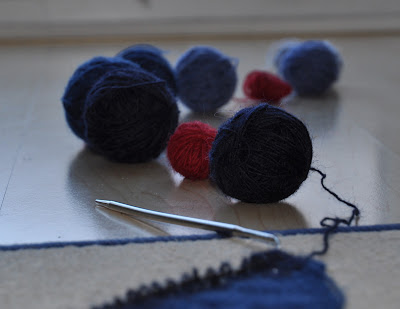 As I actually will knit less rows now to get to the end (the stripes are somewhat narrower now), I should be fine.

The town of Meissen is about 25km away from Dresden, situated on the banks of the river Elbe. It is probably most famous for the Meissener porcelain, the first high-quality porcelain that was ever made outside of China and the orient.

Founded over a 1000 years ago, it sports a large castle (the Albrechtsburg) and a nice old town center. Within the confines of the Albrechtsburg is also the old cathedral. 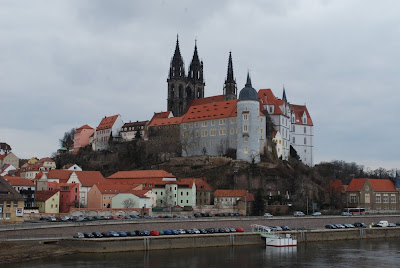 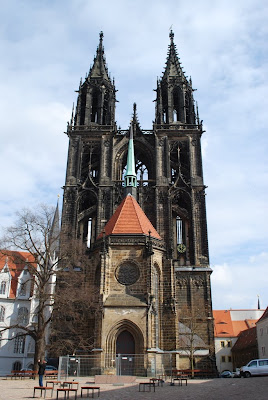 I took a tour around the place. I might not be a devote church goer anymore, but I still admire the architecture. 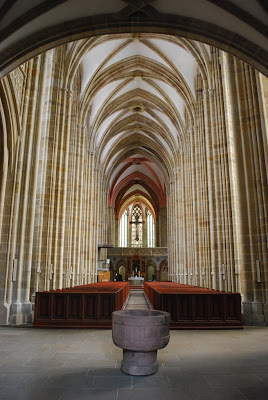 One of my favorite things in the Albrechtsburg were the many little details, like the iron door knocker and the old door handle. I also took a dozen pictures of the floors, with their repeating patterns (though showing them would sort of overload this blog today) 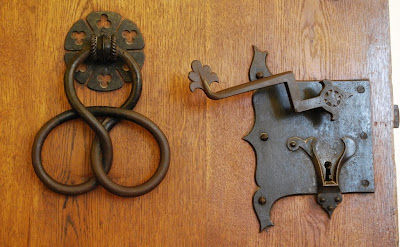 However, what loved most, was the spiral staircase in the Albrechtsburg. I just love those things, and finally I got a decent picture of one. I think I might blow that one up and hang it on my wall. 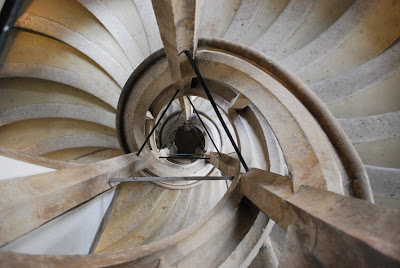 Posted by Sapphire at 4:23 PM No comments:

As a knitter, I almost never have only one project going. Usually I have at least one small, portable project, like a sock. Then I may have a a long term project, one I can pick up any time, knit a little bit on it, and then go one to something a bit more interesting. I also like to have one project, which is more or less mindless TV knitting, where the fingers know what to do and I can concentrate on whatever is going on on the scree. Sometimes I also have a proper project, like a sweater or a cardigan. Those are usually more of an investment in time and money. And then I like myself some lace knitting, or fair ilses, which is a challenge and demands more attention.
Of course, any of those projects can be a combination of the above mentioned things. Mindless TV sock knitting - can be done. A lacy, complicated sweater - no problem.

Right now, I have those projects ongoing:
Dawn is a pattern in a book I don't possess. When I saw the pictures I thought it would be simple enough to figure out how it's done. I started and all looked fine, but now I have a problem. The angle on the left hand side should be a right angle. But it's not. And I should have known that before. When you decrease every other row when knitting garter stitch (knit back and forward), THEN you get a right angle. But when you decrease every other row when knitting stocking stitch, you don't get a right angle. That's because stocking stitch has a different row to stitch count. If you take a square of a stocking stitch knit fabric, you will have more rows from top to bottom than stitched from left to right. Unlike garter, where the row count is almost the same as the stitch count.
So, what to do?
I guess I'm going to rib up that section beginning at the darkest stripe and knit that part again but doing some decreases also on the wrong side of the fabric. Maybe every sixth row. Only problem with that is, that I then will get narrower stripes than before.
Ah, well, I will see. 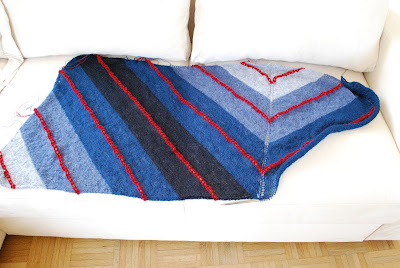 As the 'small portable' project I have a pair of fingerless glowes. That is, it's not a pair yet, but only one glove. That one glove, on the other hand (pardon that pun), I seriously love. Nice, tight fit and the yarn (a 100% merino) is super soft. 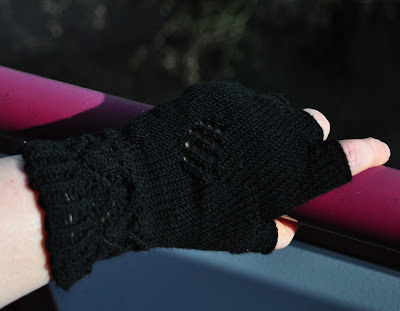 In the 'not really knitting' category, I've got a nother weaving project on the loom. This may, or may not, turn in to a kitchen towel. It is narrower than I hoped it would be, so the dimensions are off, but on the other side, nobody ever said a kitchen towel can't be long and narrow, right? 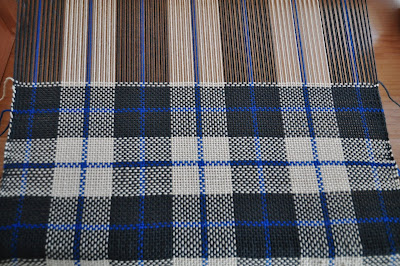 Then, I have actually one finished project, which are the Feuerland socks for my mom. The fit and have gotten the latex dots one the sole for better grip, so they will be handed over as soon as I see my parents again. 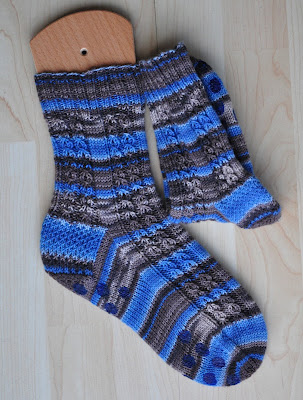