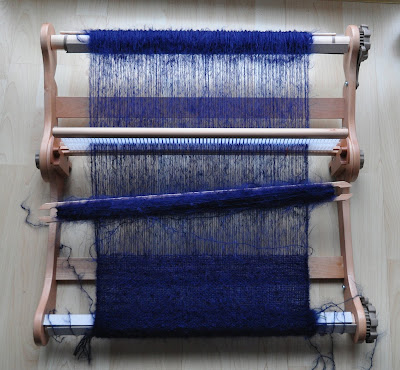 This is a Ashford Knitter's Loom (and, no, I'm not sure why it's called a 'Knitter's Loom'. It's not that one HAS to be a knitter to weave with it)
At the moment, the loom is wrapped with some old mohair yarn I've had in my stash forever and never quite found any use for. Weaving with that stuff is ... interesting. When you move the reed (that's that thing in the middle where all the treads go through) half the threads move up, the other half moves down. Ann thanks to the 'fluffyness' of the yarn the threads tend to stick to another. Getting them free requires a bit of work, though I'm getting the hang of it.

My very first piece was much easier. I've used some old Wollmeise yarn (the color is Wellensittichvogelfeder). 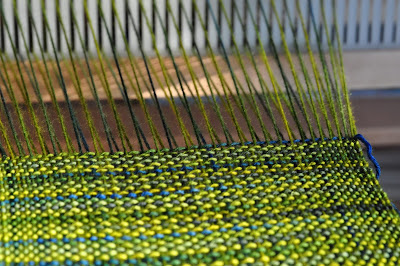 On the other hand, with this piece I had big problems with tension. The width varies between 11cm and 15cm. I know by now what I made wrong, so this shouldn't be a problem in the future (at least not too big of a problem) 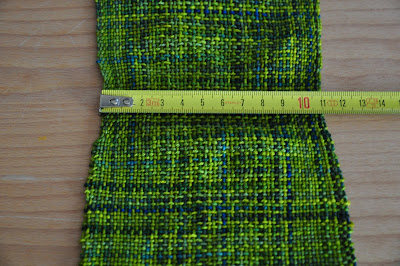 One more piece in between those two was a trial piece from the magazine that came with the loom. Much fun to play with colors and how different counts in the wrap or in the weft affect the result. 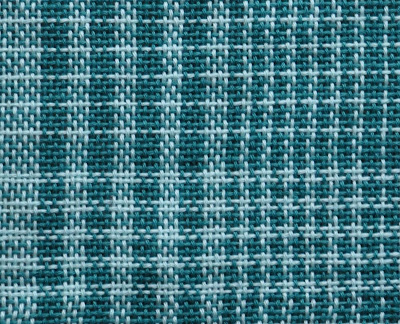 Oh great, it's snowing.
That means I better stay inside and weave a bit more, right?
Posted by Sapphire at 9:20 AM No comments:

Last week I managed to finish the Adventskalenderschal 2010. This was a project by several people on Ravelry where they got together and designed a shawl. Then, during the Christmas Season, they revealed a clue a day (kind of like opening a door in a normal Adventskalender) and if you wanted you could knit along with the rest of them (there are 288 projects for it registed on Ravelry) until, after 24 clues and on Christmas Eve, you've got a finished project. 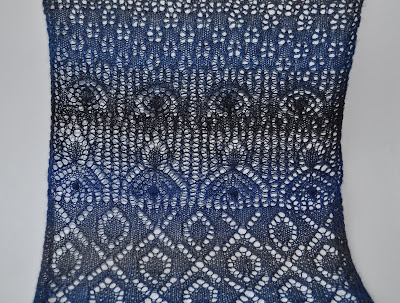 I did wait until the knit along was completed and all parts where posted in one handy-dandy document, before I decided to start my Adventskalenderschal. 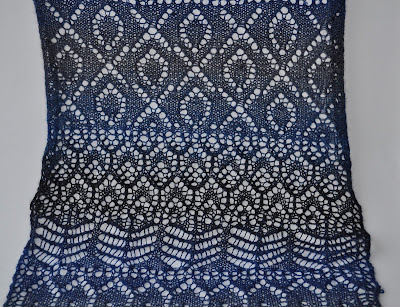 I used Regia Lace, a fairly new garn similar to the Regia Hand Dye, only thinner (for lace) 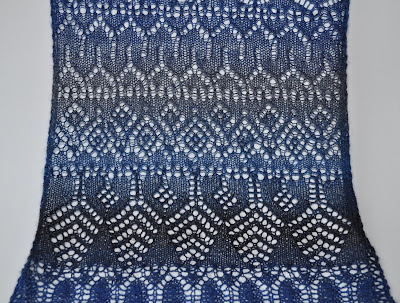 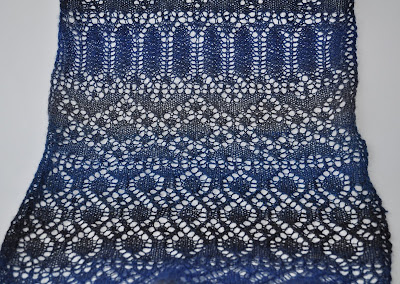 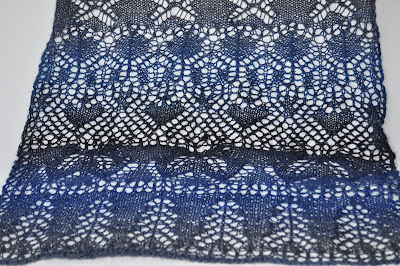 
Next I've moved away from lace knitting and turned my hands on crochet for a change.
And what does one normally crochet?
Potholders: 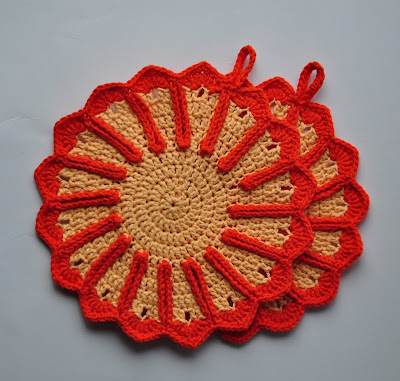 I discovered only while I blocked those that I managed to make a mistake by not paying enough attention. With both of them.
Still I love them as they are bright and sunny and still usefull.

Not quite so useful, but still fun is M: 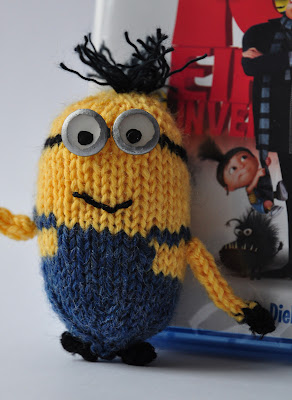 He's Michael's Minion and already moved in with my friend to look after him.
Can there be a more usefull birthday gift?
That is, if he doesn't manage to blow up his place ... (go, see the movie and you know what I'm talking about)
Posted by Sapphire at 6:14 PM No comments:

A Walk Through The Neighborhood

Last week, on my day off, I took a lazy stroll through the neighborhood at The Other Place.

Just down the street, there's an abandoned building, which surely has seen better times, but that still looked out at the world with confidence and pride. 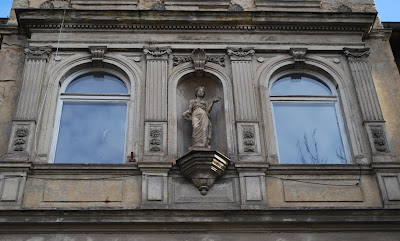 Even if some houses have people live in them, the surrounding fences sometimes are rusty and overgrown (which, I believe, adds an undeniable charm) 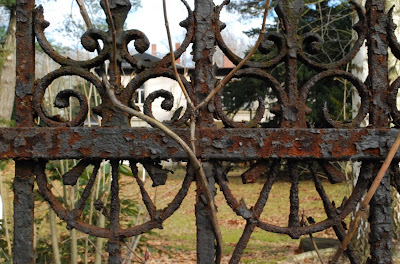 Seeing that old bus, I can't help but think if some people missed the memo that the 70ties (and for that matter the 80ties) are over. 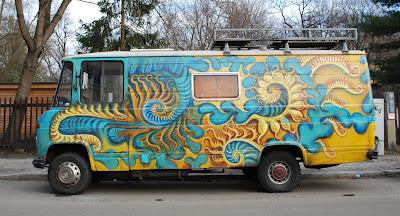 I'm sure, though, the cat here couldn't care less (she didn't care much about being photographed either...) 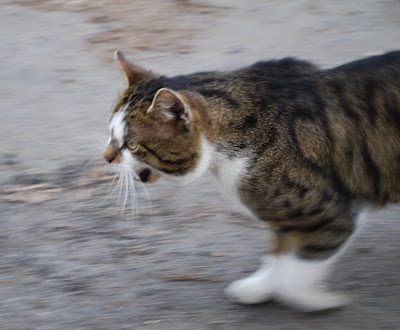 Looking through doorways into the dark, I wonder what lays back there. 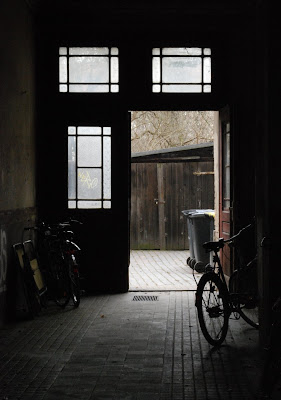 Coming back home (I mean the Other Home, of course) and looking up to the windows of my living room. In my line of work I usually end up working wherever my company's customers are. Some time, when it is a longer engagement, I end up with an appartment at that town. I've lived for half a year in Dallas / Texas several years back, and also had an appartment close to Paris / France for a year or so.

Last big customer project got me an appartment in Dresden (at least it's still in Germany) and over the last few weeks I've tried to make it a home. As I spend a lot of time there, there's obviously a lot of my stuff that travels with me when I get there. And once in a while, stuff I thought is at my place home is in fact (most probably) in Dresden.

Case in point is the other half of the leg warmers I've made for my sister. I was sure I had the first piece I've knitted at home, but coming home this weekend, I can't find it here. Which means it probably, after all, in the Other Place. 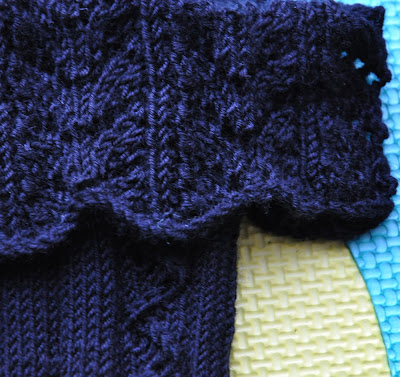 Which also means I'm not able to pack them up and send time to sister dearest just right now.
Which sort of sucks.

If, however, it turns out it is not in the Other Place after all, and if it's in fact lost somehow, I still have one skein of the yarn and I could knit aother one.
Which, upon finishing, would garanty that the moment I've done that it would reveal that the first legwarmer was right in front of my eyes and had not, in fact, been lost.

Maybe my sister would be interesting in growing a third leg ;)

Ah, as a certain birthday has come and gone, I can finally show this here. 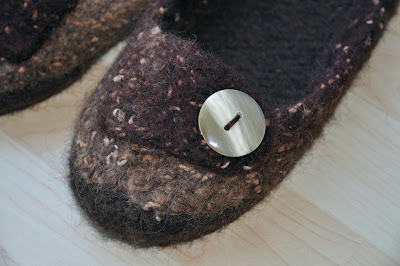 Yep, another pair of the infamous French Press Felted Slippers.

Posted by Sapphire at 5:24 PM No comments: