Tomorrow is December 1st, so it's high time I start with this years cookie production (also, for a change I have nothing else planned this weekend)
First on the agenda were so called French Rhombi, though basically there are not that different from the Cinnamon Stars I normally make. 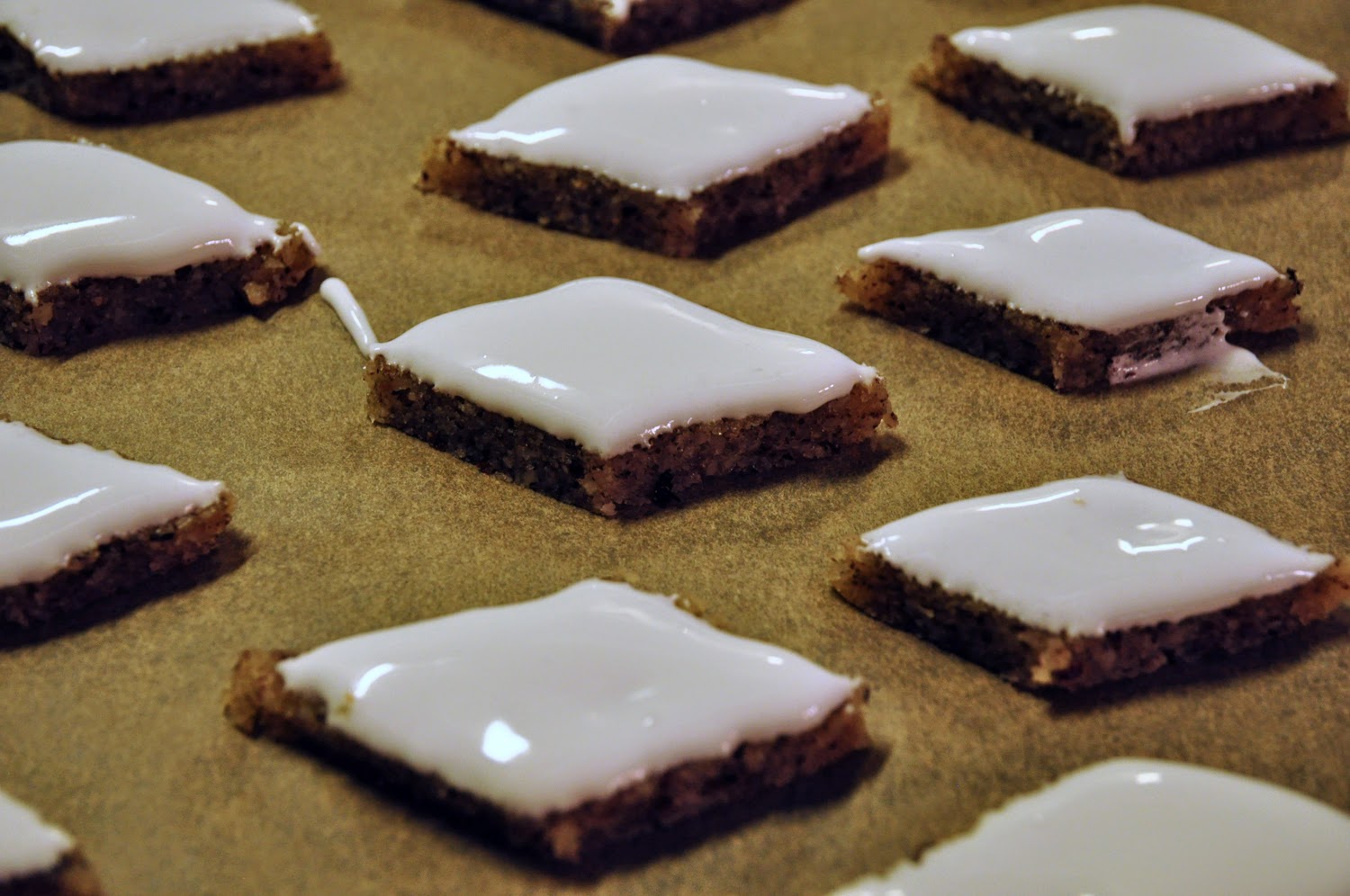 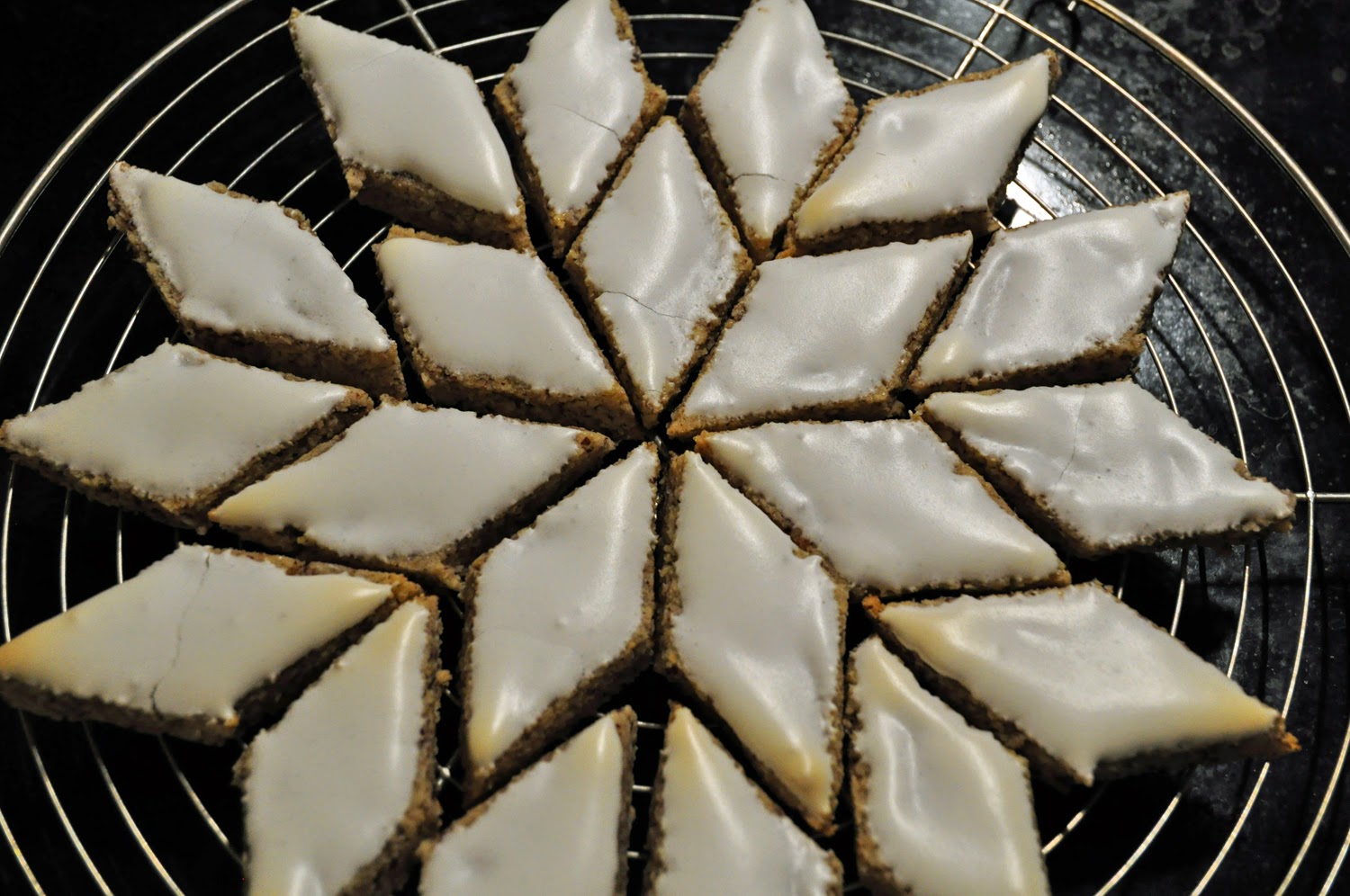 One important tip: DO NOT drop the backing tray as it comes out of the oven. This does not end well. 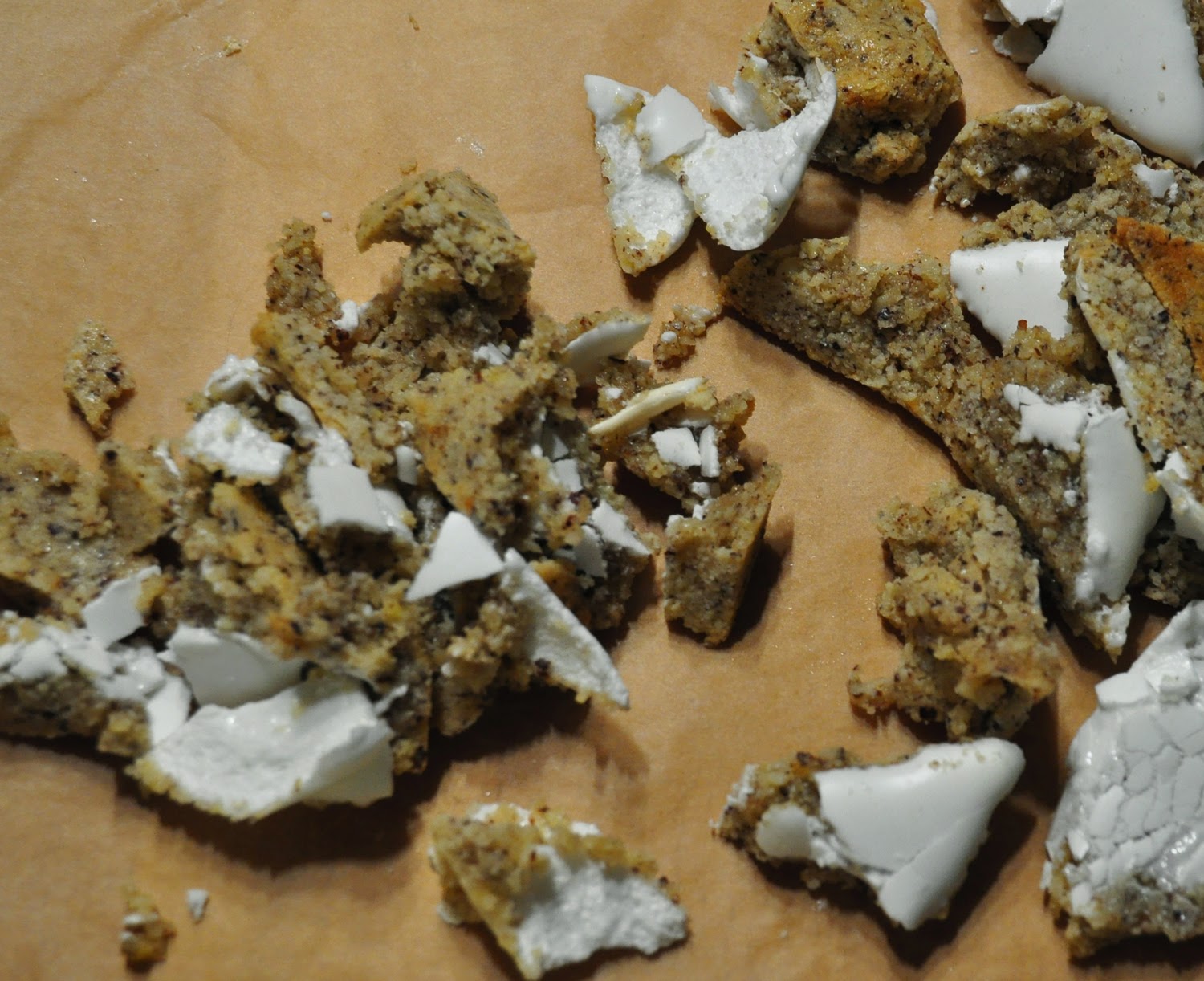 The 'Gebabbte' make a return. 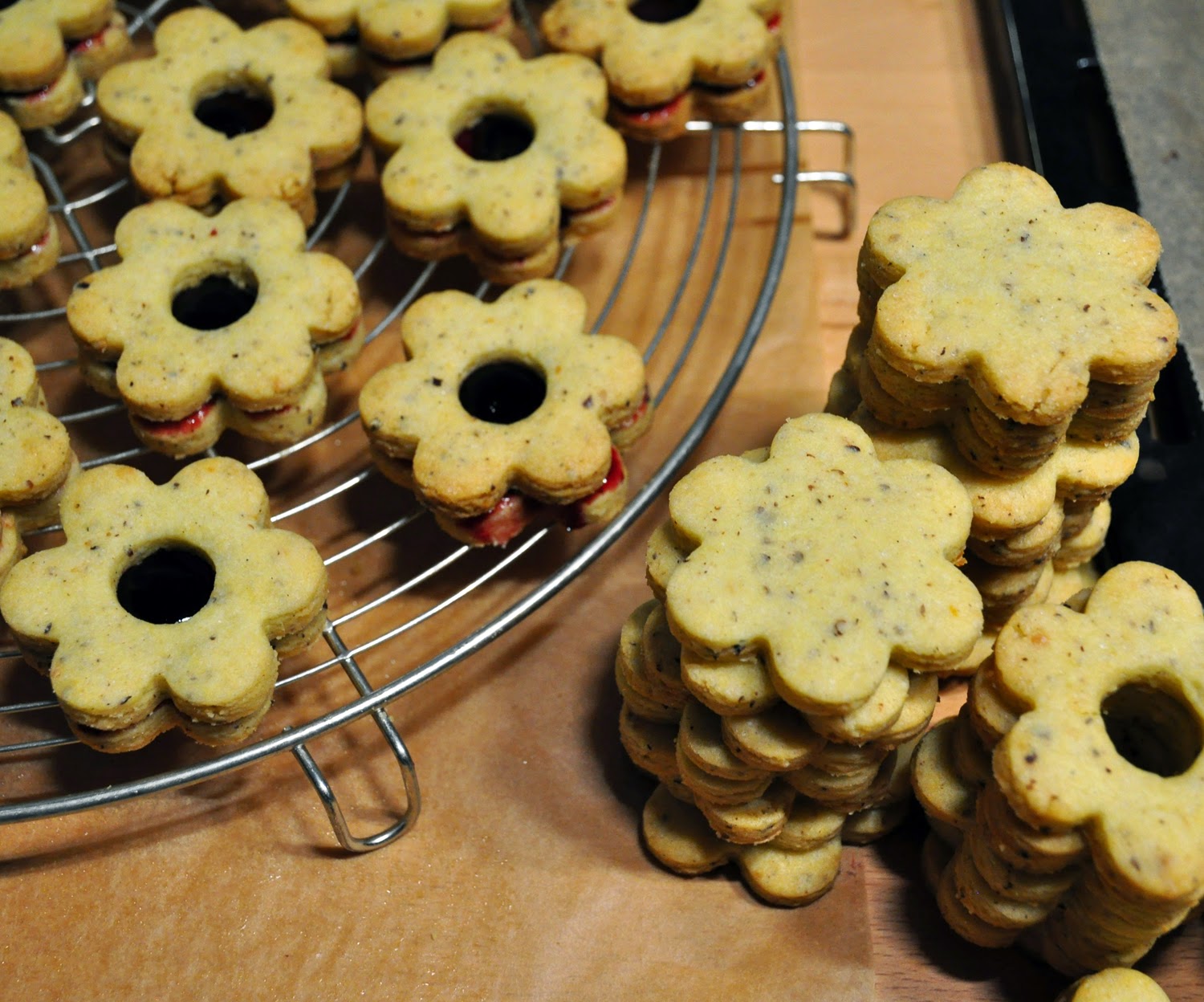 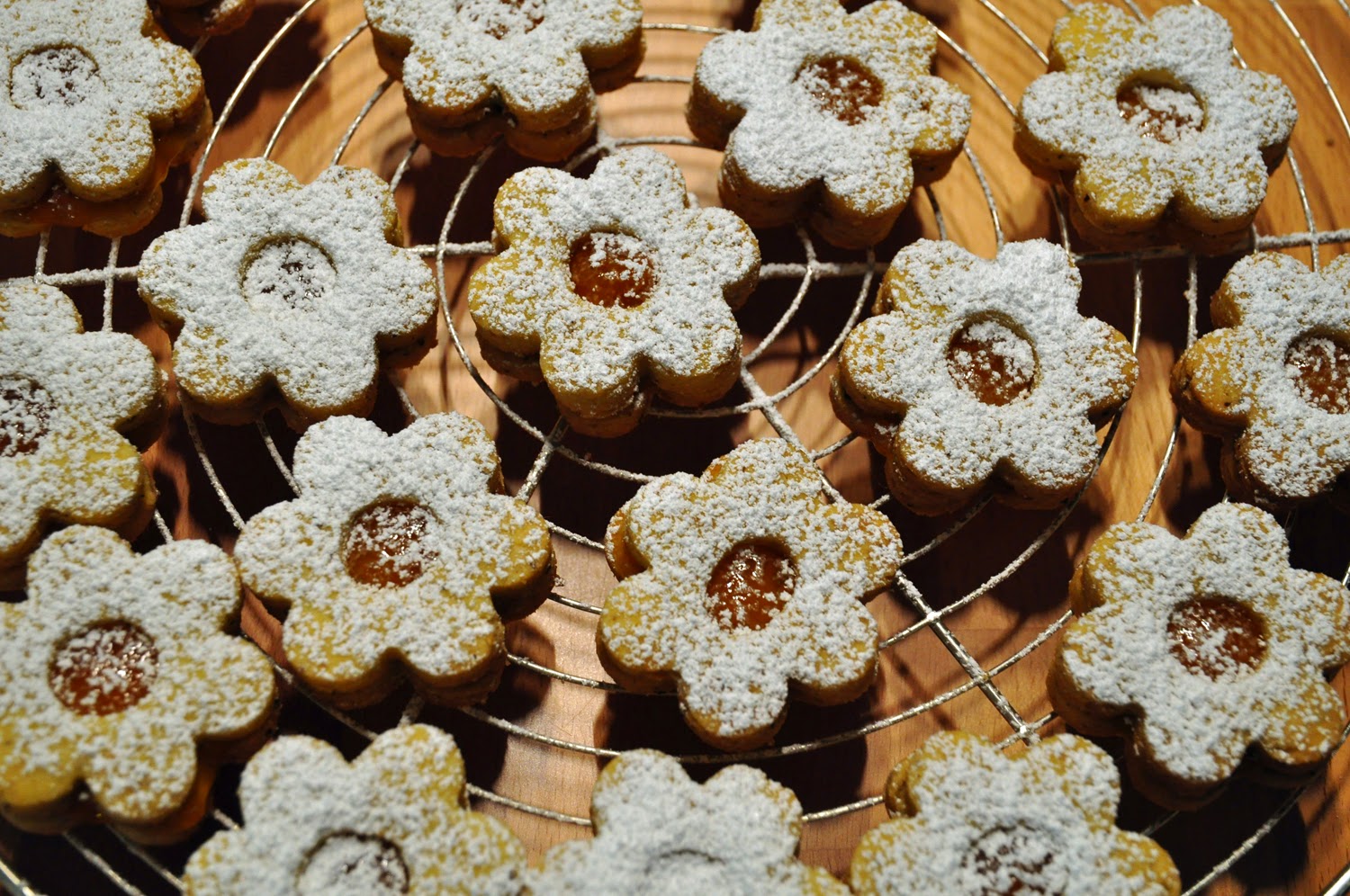 Finally I made a double batch of Walnut/Marzipan confection. One batch stays with me, the other half goes to my mom. 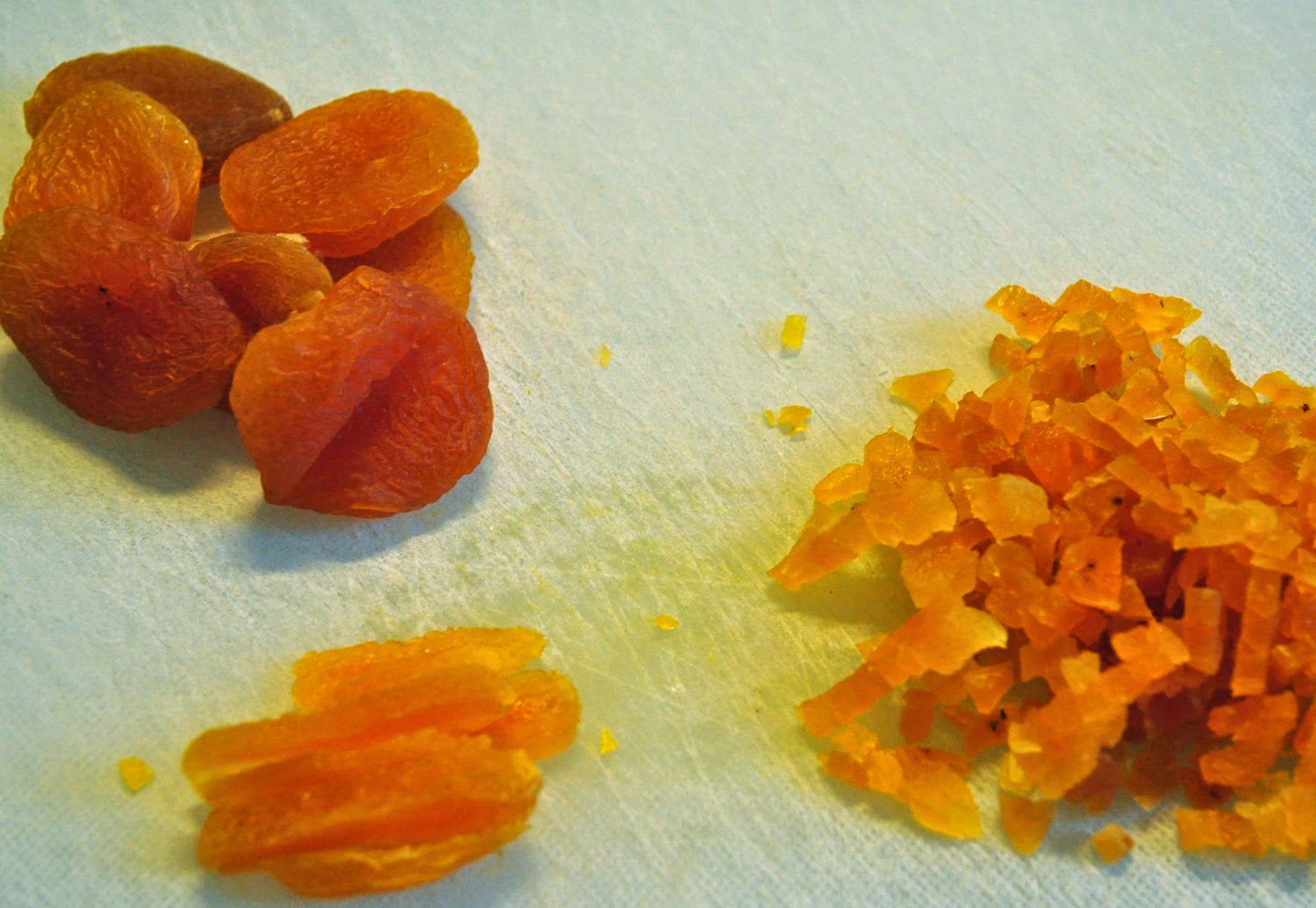 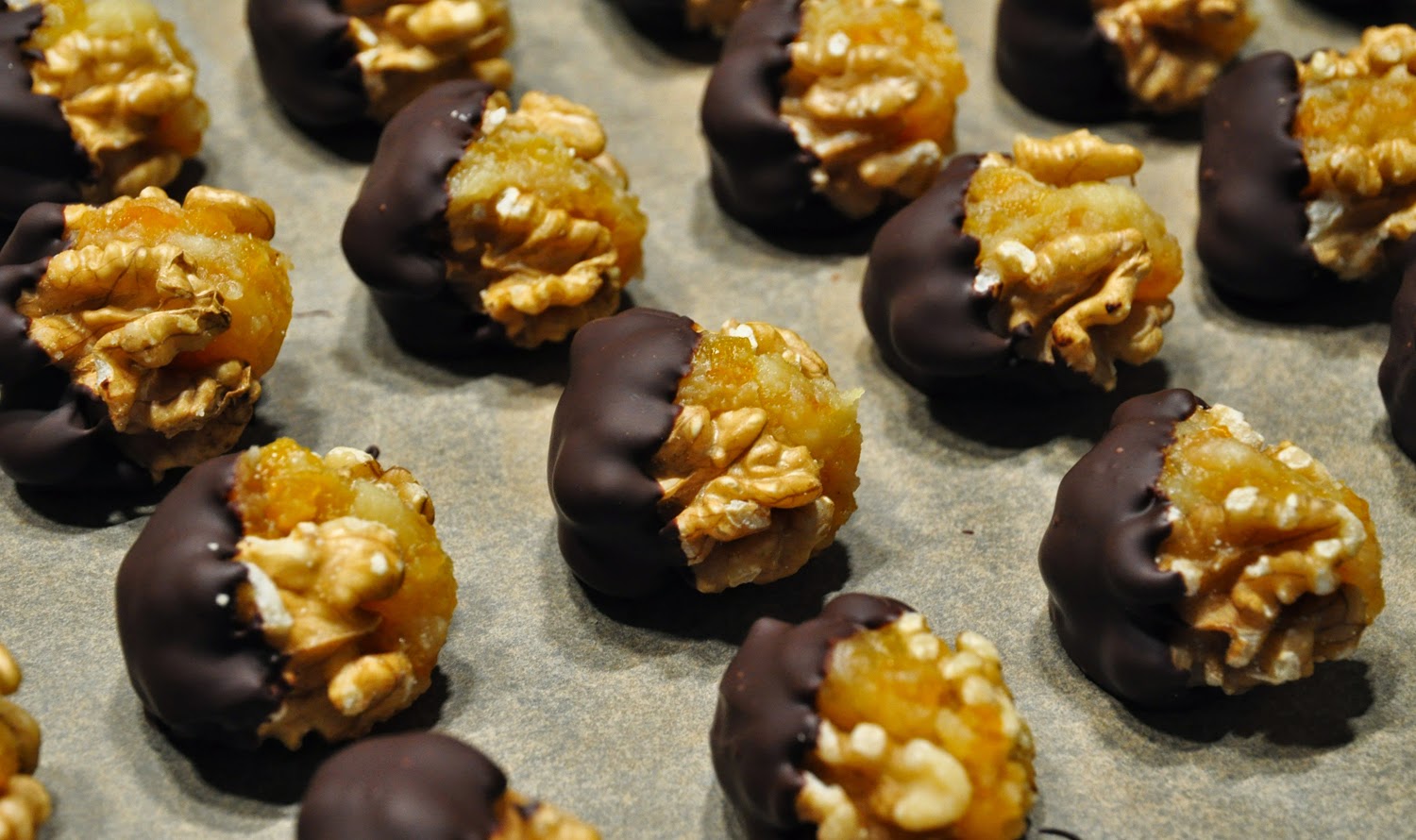 I also made Heidesands with Ginger again, but they are super borring to take photos of, so no picture here.

Some updates on the sewing and knittig front.
Socks - those were originally ment to go to my mom, but when I tried the first one on, it was a perfect fit to my foot, so I'm posting this while wearing my mom's socks (don't worry, I've already am planning another pair for her) 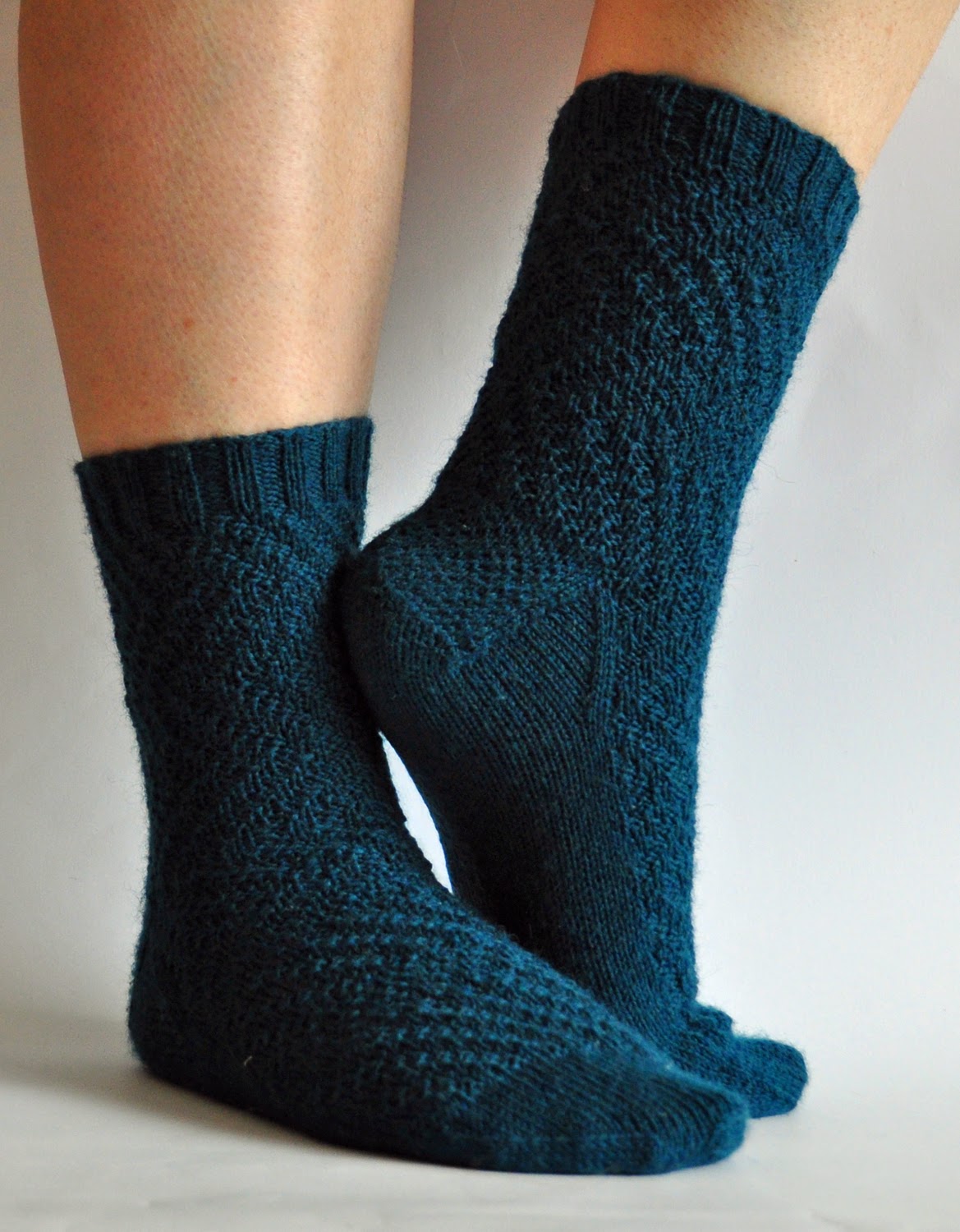 Shawl - this one was my backup project. I ended up with a total of 31 leaves. It already has seen some warming action

Bag - I bought the pattern at the Handarbeitshaus in Gröbern a while back. Over time, I sort of kind of collected the fabric here and there (some of it is left over from two projects from 2012, some of this rescued our of scrap bins, some of it, ... who know where I found it)
I changed the pattern a bit, mostly by adding grommets around the upper edge. The grommets didn't stay at first - the fabric kept slipping out - so I added some fabric glue, and now they stay were they are suppossed to be.
Useful bag, and it's already in use for a new knitting project. 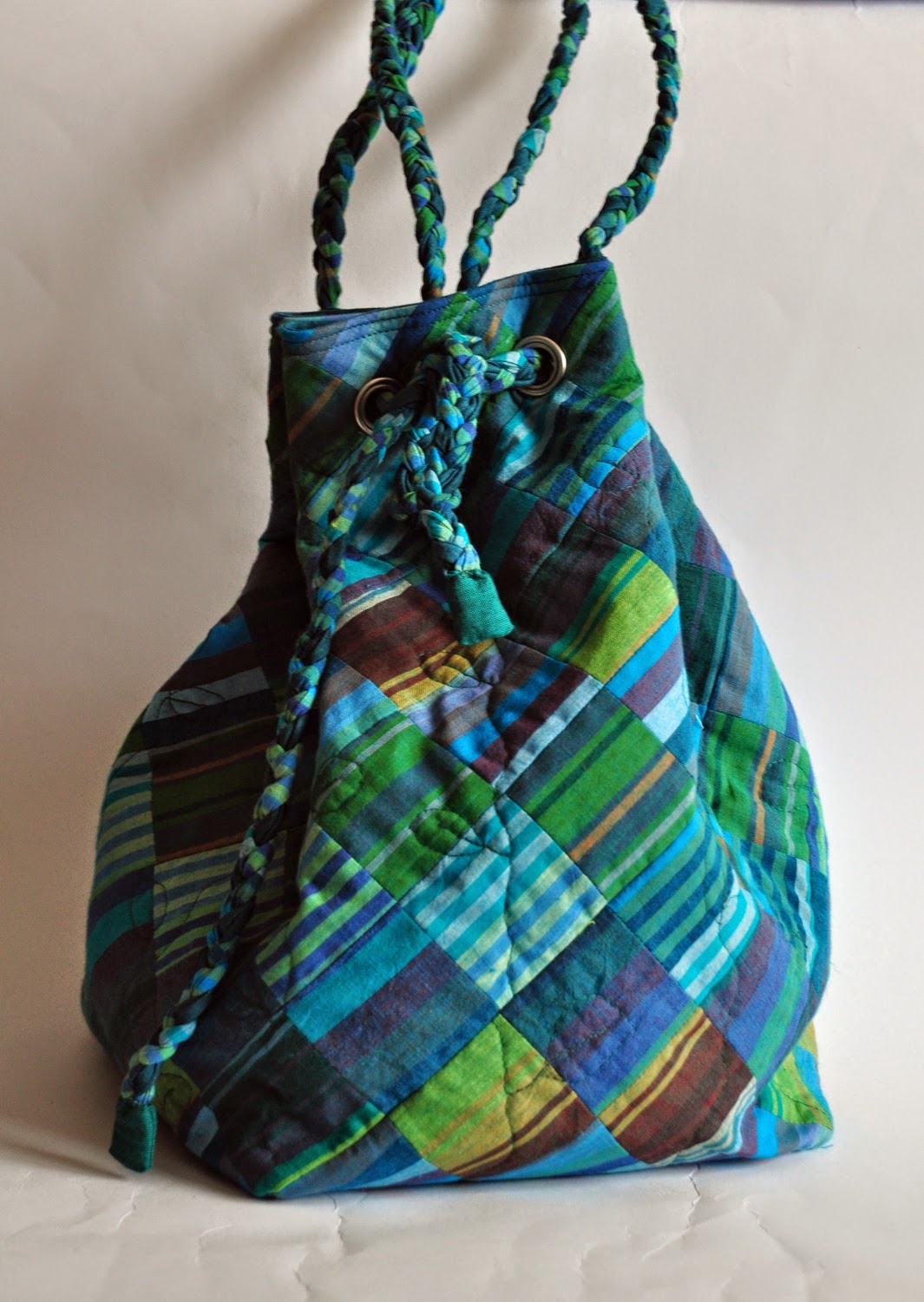 Posted by Sapphire at 2:31 PM No comments:

A while ago, I did see an amazing quilt on Pinterest of an owl done in ticker tape quilting (just google 'ticker tape owl quilt'; a picture should come up)
Back in June I pulled out some of my scraps (there seems to be no end to my scraps) and gave the technique a try. I originally aimed for a table runner, but then what I came up with clearly wanted to be a wall hanging.
It's probably not a surprise from some readers that I do love light houses, so that's what it turned into. If you remember my first picture of the quilt, the sun I had originally now has turned into a moon.

First, I had laid out my scraps in the shape I wanted (I did mark the edges with an resolvable pen, so they were nice and straight). I fixed them first with pins and later with thread, as I didn't want to become a pin cushion, once I took the thing to my machine. This was a bit extra work, but paid well in reduction of ouches on my side.
I did sew the whole thing with different colors of threat, matching the back to the front, so in the back the mirror image of the lighthouse shows up (and I have no idea why the picture is sideways - sorry about that)

The quilt hung for months on my design wall, even though I knew all left to do was to do the binding. Which I finally did last night.
All in all, I'm very happy with the finished product. Now, I only have to decide where to hang it up.

A friend of mine has become a daddy. Little Judith was born 7th of October and last night we finally had a chance to adore her (which we did - she in turn was sleeping) and bring her her gifts.
I planed for a while to make her a baby quilt, but in the end I made two, simply because I couldn't decide if I should go more modern or more traditional.
The first one is the more traditional, bright colored one with funny animals. The patterns is called jungle path baby quilt and it's free. I quilted little hands all over the place. 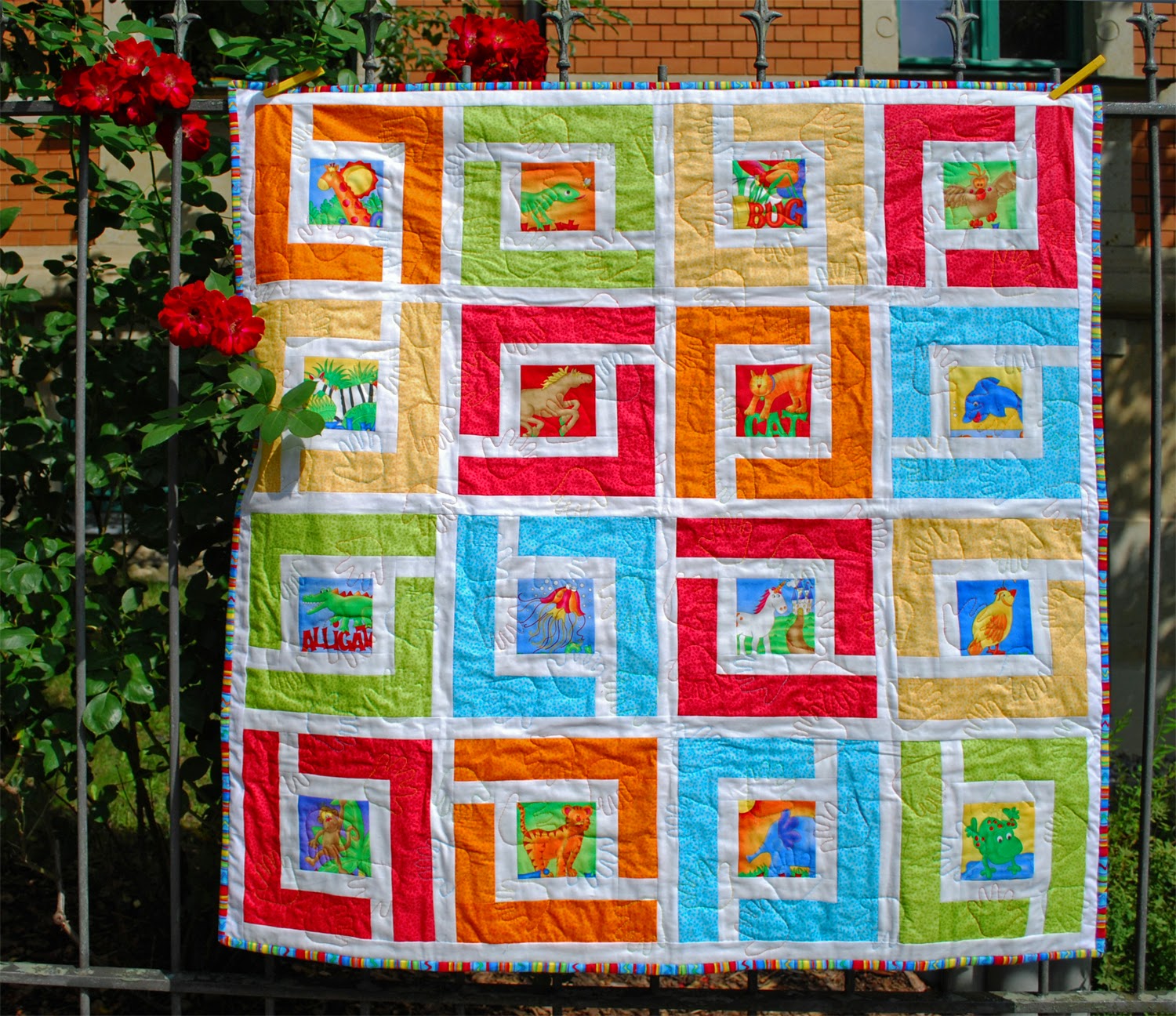 The second one is definitely more modern, only uni colors and clear triangular lines. The back, I think, I have shown you before in an earlier state. Quilting was triangles and straight lines. I love how it came out. 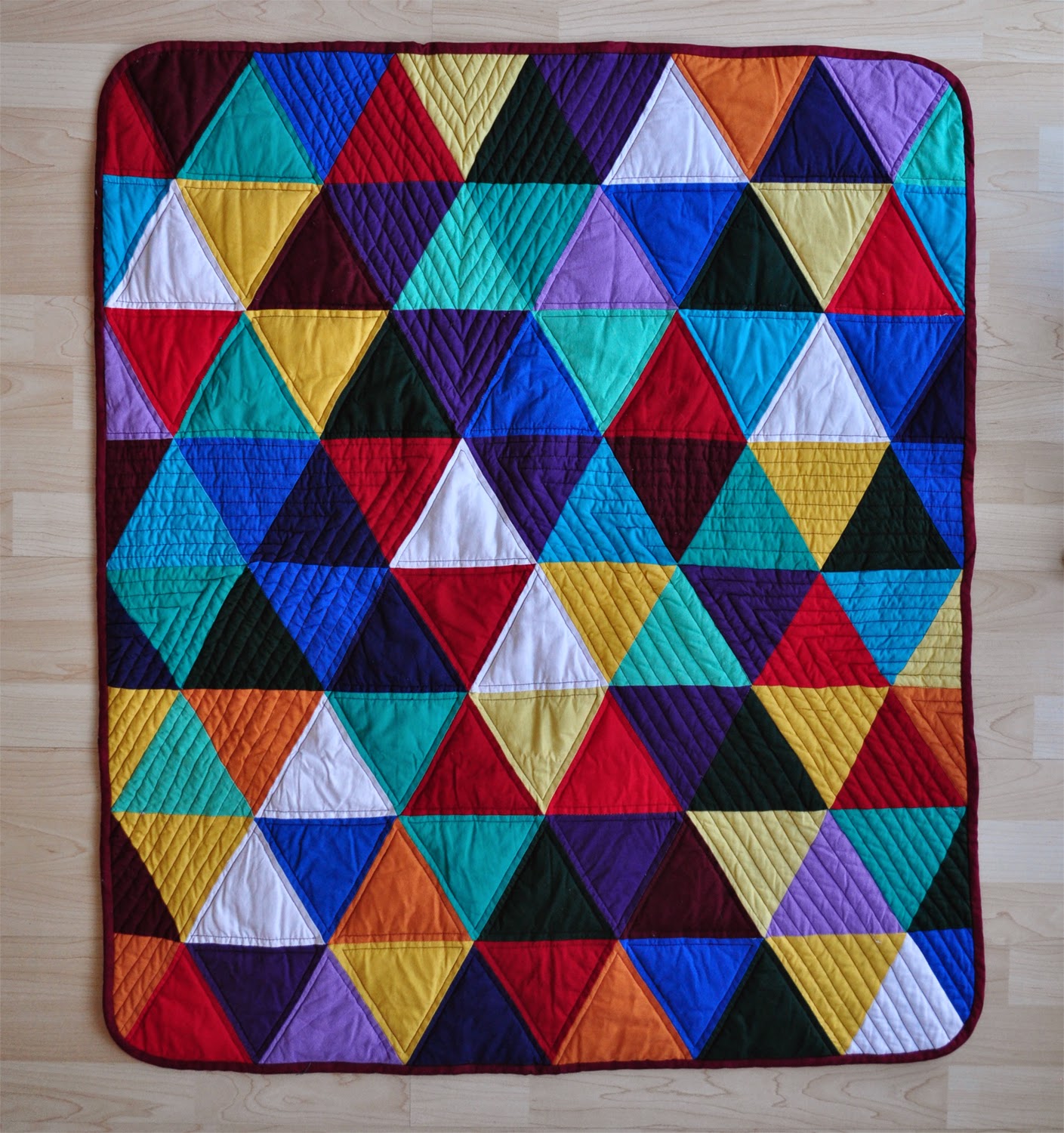 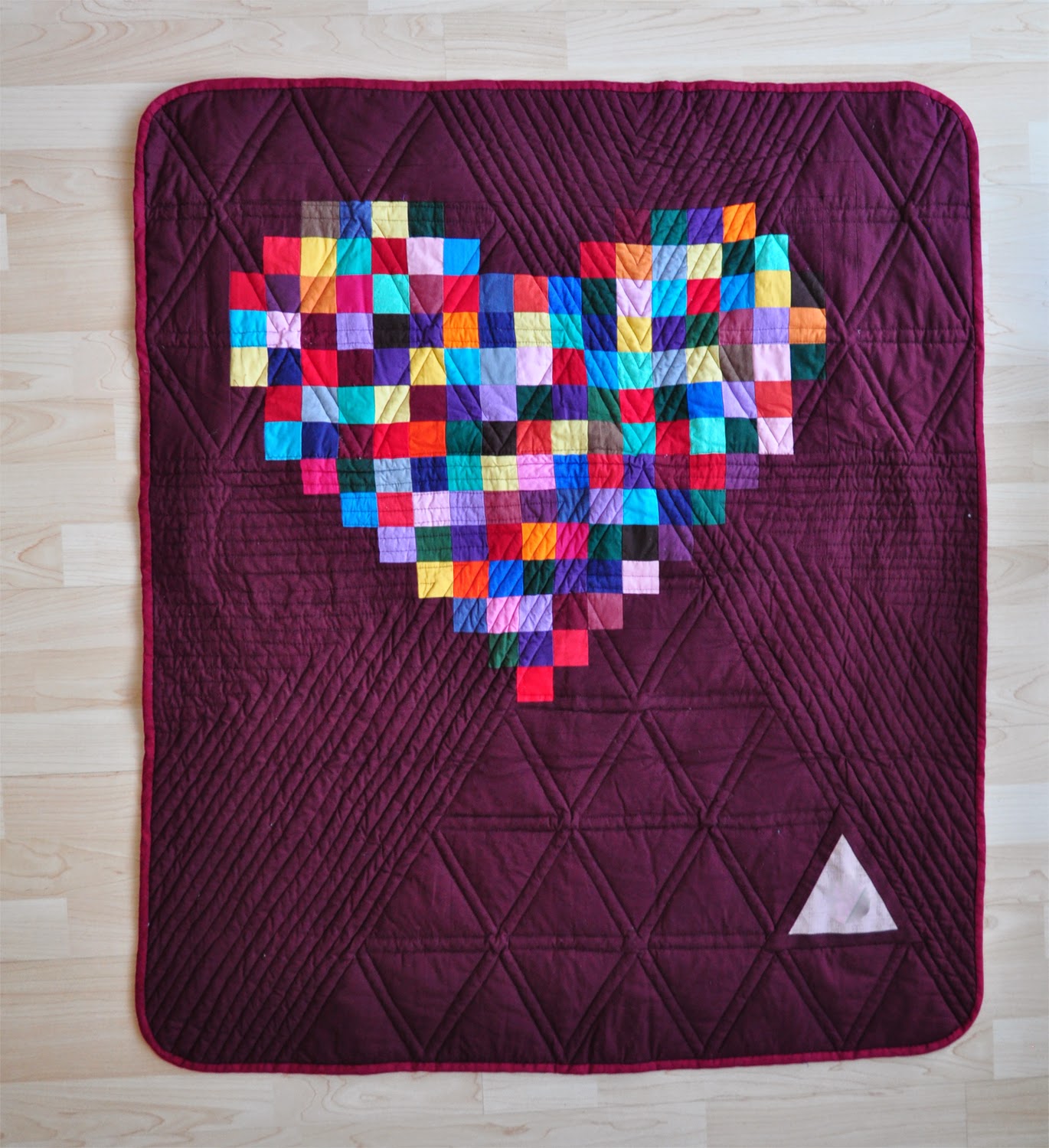 Finally, I also knitted a Baby Surprise Jacket, which is one of my all time favorite pattern (and, for a baby, is very quickly done). The yarn is called Knitcol by Adriafil, which I bought in a yarn store in Cape Cod. 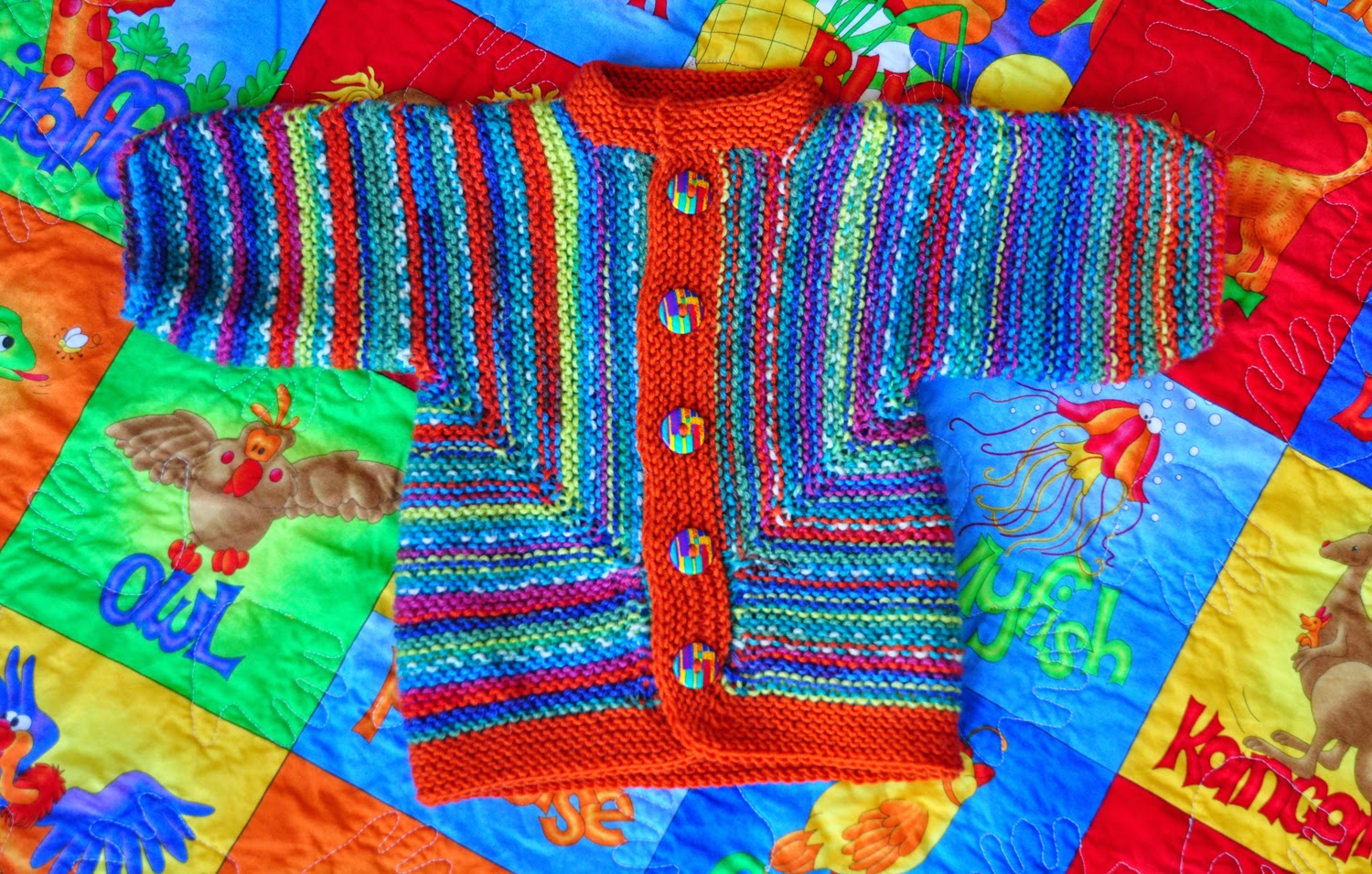 Not planned this way, but I find it matches the first quilt almost perfectly.