The Importance of Doing a Backup

The week started with the worst case scenario for my computer (laptop) at work. It crashed. Literately. To the floor from a height of about 1.20m. While it was switched on! (That's what you get when you try to do three things simultaneously, while talking to the customer on the phone at the same time)

After that all I got was the not so friendly message 'Operation System Cannot Be Found' and that was it. Dead. Nothing else. End of the line.

Luckily I got a replacement fairly quickly (I can't do a bloody thing without the computer), but, of course, my last backup has been ... oh ... a looooooong time ago. I did loose a lot of data, and reconstructing it from the e-mails I've sent out over the time is a slow and painful process.

So, people, stop reading right now, and make a backup of all your important data. You might not need it, but if you do you will be glad you made the effort.

On the up front, my dad, who's been in the hospital for one thing and then was kept for another is back home. He doesn't have the results of the last examination yet, so there's a bit of worry still, but I try to be optimistic.

I've finished the wrist warmers and they are lovely and cozy, though a bit long in the hand section. 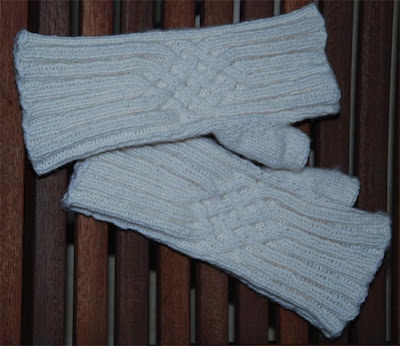 I've got a bit of the yarn left and thinking about making a headband from it. I'm thinking of Calorimetry from the winter issue of Knitty, though the pattern there is writing for a thicker wool. I'm also not quite sure I've got enough wool for it, but guess I'll give it a try anyway.

Last week I've mentioned I've bought material for a new cardigan. I want to knit Mr Greenjeans (again a Knitty pattern ... don't know what it is, but I really like a lot of the stuff they do)

I've started out with a yarn called Riana by Gedifra. According to the information in the band if would be a perfect fit gauge wise, and I sort of liked the gray with the little speckles of other colors. But when I started I found it knits up too loosely and that I don't like the colors after all.

So I returned to the store and exchanged it for another yarn, Bingo Chinè by Lana Grossa, which knits up much tighter and I like the lighter gray much better. 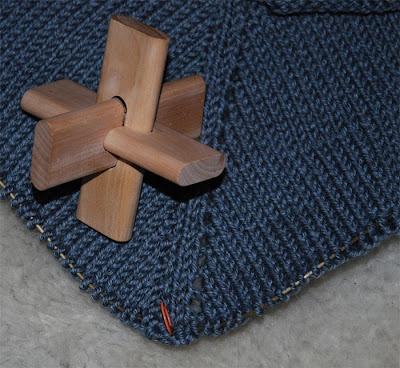 (it is a bit lighter than in the photo here)

When I knitted my swatch I've ended up with almost perfect gauge (18,5 stitches per 10cm instead of 18) and decided to start. Two and a half balls in the pattern, I checked my gauge again and now I'm suddenly at 16 stitches per 10cm!

How did that happen?

I guess I might be able to fudge the pattern to get it to fit, but then I've read that the wool grows when washed by another 20 ~ 25%, which would make the finished cardigan gigantic.

For now I've decided to knit another swatch and wash it to see if it really grows so much and then think about the whole idea again.

I've closed the border and everything aligns as it should. 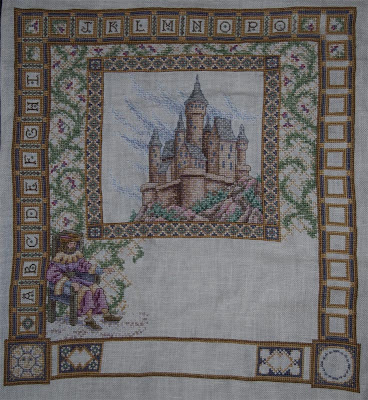 The Importance Of Doing Backstitches

So, my Aunt's Duty is done, all that's left is to deliver the finished product into the arms of my sister. 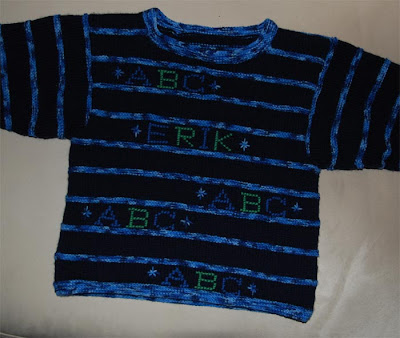 The knitting was the easy part, the sewing and the stiching not so much. First I tried to use normal stitching floss for the letters, but this looked crap. Of course I had no wool in the correct color in my stash (and considering how much wool I have in my stash, this surprised even me), so I went and bought some more yarn. As I was able to return two balls of the original yarn that I didn't need, this wasn't so bad. However, my self-control was so weak that I bought more yarn for my next big project, a new cardigan (more of that one maybe next week)
(or, rather, if I have to drive all the way to the yarn store, I m ight as well buy more wool, right?)

I have a little in-between project going, from a wool I bought two years ago on the Isle of Skye in Scottland. 100% wool in natural white ... that's pretty much all I know about that wool.
It's perfect though for this project: 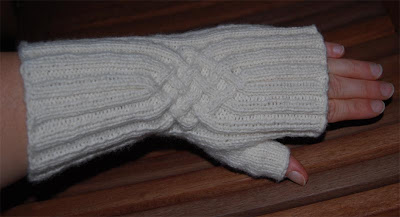 Wrist warmers (the link to the pattern is here; it's in German though...)
One wrist warmer is finished, the other is half way there.


Last week I've got back to the Castle Sampler. As I was a bit sick of all that border stitching, I've started with one of the figures in the lower part of the sampler.

See: Man in chair (without back stitches) 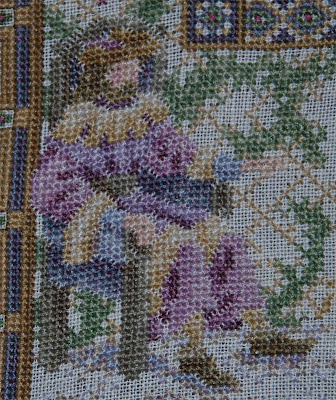 And see: Man in chair WITH back stitches I might bitch and moan about doing bs, but in the end it's so much worth it.
Posted by Sapphire at 6:57 PM 1 comment:

Less said about this week, the better I think. Good thing it's over.

There was too much work, meaning that I didn't get to do any stitching done and only some of the knitting for the ABC pullover. I do hope to finish it by next weekend, though.

Other than that, not much I want to talk about at the moment.

End of August I've started a pair of socks in Noro Sock Wool. This wool is fairly new and as I've knitted with Noro before (and, man I do love my Lizard Ridge blanket, now that it gets colder) I wanted to give it try. I've heard a lot about the yarn - it varies in thickness drastically, it breaks easily, it's a pain to knit, it contains many knots, the yarn has no elasticity whatsoever ... and really, most of it is true. What makes is worth knitting though, is the amazing colors the yarn has and how they slowly change along the way. 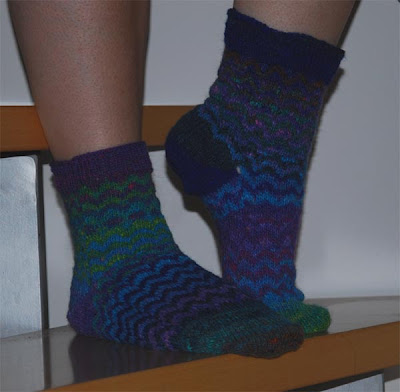 (sorry about impossing my less than lovely calves on you ...)

Today, I finally finished the Ziggys (pattern can be found in the last summer edition of Knitty.com). It's been a while since I did fair isle knitting, and going back to it by using a new (well, new to me at least) knitting technic wasn't maybe the smartest move. The new technic (Magic Loop - knitting of a sock toe up on a circular needle) did work, sort of, but I don't think it will replace the 'classical' sock knitting with double pointed needles for me.
The yarn didn't cooperate for some parts and I had to break it in a few places as I just couldn't see the pattern. This in turn lead to going into panic mode that the yarn won't last, resulting in me knitting the socks shorter than I've intended. (and of course, there is plenty left and I could have added some length) And there IS truely no elasticity - I had to increase the number of stitches so I'm able to get them over my heel.

So, conclusion: Lovely colors, but no more socks with that yarn for me.

To get a bit more relaxing knitting in, I've turned to a project that I'm doing for my youngest nephew. While I was in Sweden, my sister pushed a magazine into my hands, and let me know that I should make that pullover in that size for my darling nephew. 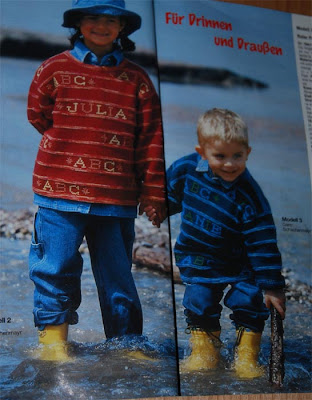 (the blue one on the right, but with the size of the red one)
My local yarn store had the wool asked for (though they had to order the specific color) and on Friday I've started knitting.
So far I've finished the back, and going to start on the front as soon as may be.
Easy - almost mindless - knit, absolutely perfect for watching TV.

And another update on the Castle Sampler - progress slowed a bit last week, but all in all, not too bad. 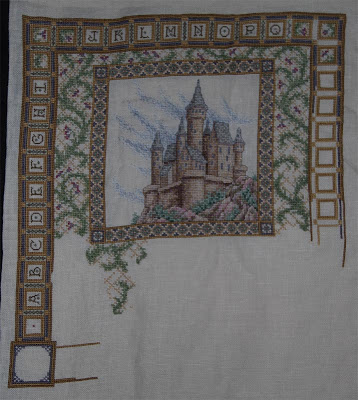 Posted by Sapphire at 5:14 PM No comments: