This is the second post of the day, covering the crafty stuff I've did while on vacation. And keep your hats on, it's quite a bit :)

While in Sweden, we watched a lot of TV. And when I watch TV, I almost always do something crafty.

The first thing I've started with was a new pair of sock. Basically, the travel sock bit (I started on the flight). The pattern is the Mock Wave Cable Socks from the Favorite Socks book. The wool is JitterBug sock yarn, which I bought in Alaska last year. 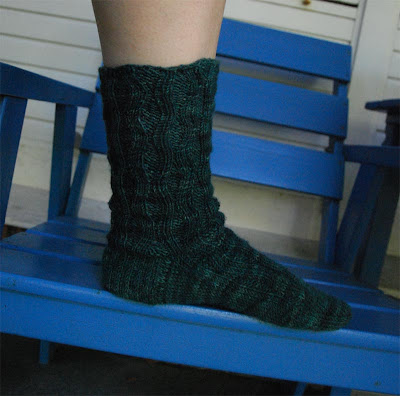 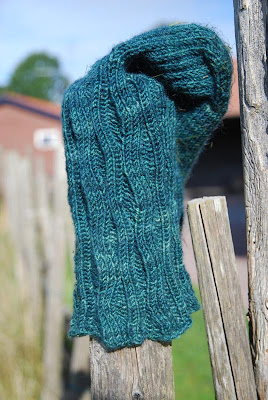 It is a fairly dark green, but maybe not quite as dark as in the first picture.

Second project was a necklace my sister made a while ago for my other sister. I wanted to learn how. 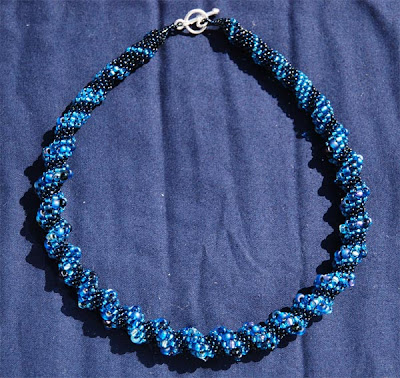 It's using the peyote stitch to create a circular tube of beads. By using four different sizes for those beads, this spiral effect is create. It's actually pretty simple.

Another craft I wanted to try my hands on is quilting. And a small kit I've also bought last year in Alaska was perfect for it, as it covered several technics, without being too big. 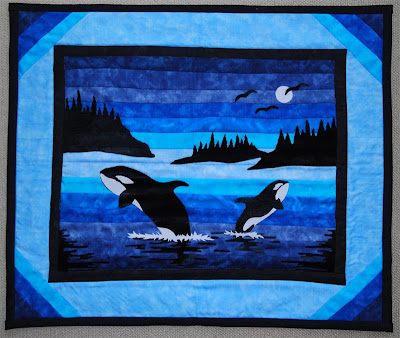 I did the quiliting in Sweden, but did the application back home. According to the kit you're supposed to add some beads for water droplets, but at the moment I like it just fine as it is.

Back home, I've felt inspired to go back (after almost half a year of abstinence) to my cross stitching. My sister is stitching on The Guardian from Teresa Wenzler, and I've got sitting at home the Castle Sampler (which my sister has finished herself, and framed and, gosh, it is lovely) 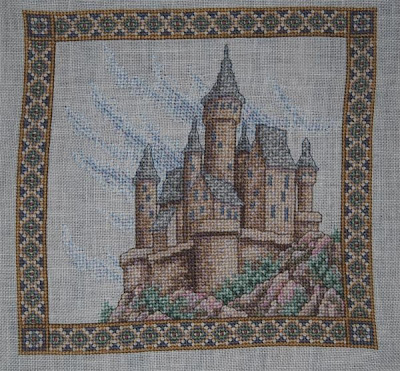 I finished the center panel now, and started with the greenery around the panel (which is nice and relaxing to stich, as it doesn't require a color change every two or three stitches)

I also bought a magazine in Sweden called Right-Angle Weave from Bead & Button.

I started out with with caterpillar bracelet, but am not happy about my color choices, so I possibly will undo it again, and use the beads for something else.

To staff off my frustration, I did just today two Wiggle Room bracelets, which are fun to make, and fast too. The second one took less than an hour. 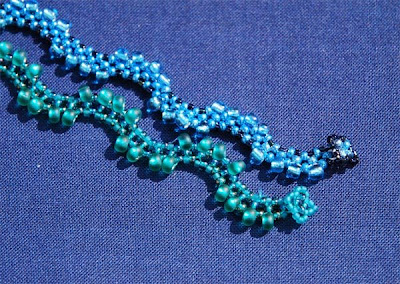 The green one is a bit too long, but the blue one is perfect and I'm wearing it as I type.

Ah, and I also finished another square for my Aran Afghan.
Posted by Sapphire at 12:10 PM 1 comment:

So much has happened and was done in the last two weeks, I decided to split it up in two posts.

Last time I've visited my sister and my nephew in Sweden was four years ago, during the summer olypmics in Athen. And again I timed my vacation for the olympics. Perfect excuse to sit together, watch TV, chat and do crafty things - in short, having a damn good time.

But we didn't just sit on our butts, but also did a bit of sight seeing and making some photos.
Not far from my sister's place is a little harbor. 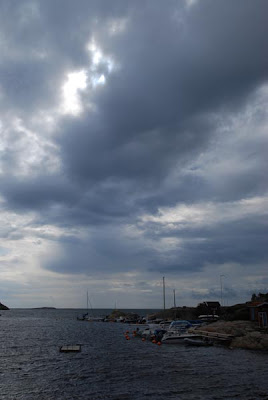 In the first half of my trip, the weather was not so good, but, hey, this adds atmosphere, right? 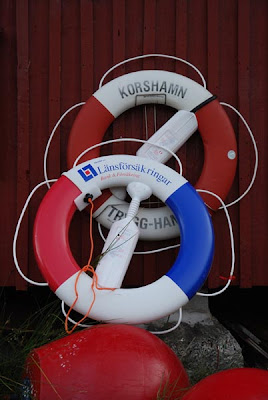 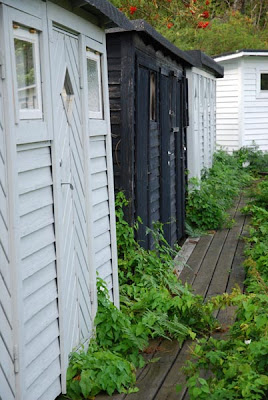 Those little huts are used to store stuff, I would think. I do love how the way is so overgrown.

We also went to Gothenburg and made a very nice boat tour through the channels and the harbor (only interupted by a little kid who pinched his finger pretty bad when we all had to duck in order to pass underneath a bridge that seperates the harbor from the channels. Eventually the parents decided they wanted to get off so they could get the little one to the hospital) 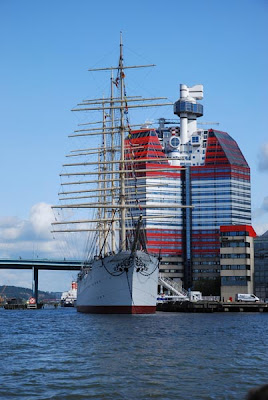 The ship in the picture is not really a ship anymore, but a hotel (but it used to be a real sailing ship - The Viking) 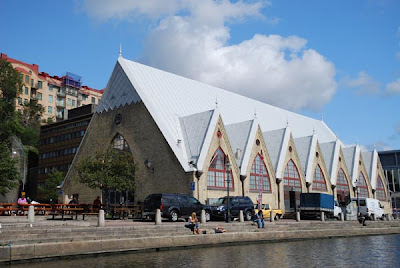 The weather has improved greatly the second half of the trip, so we made another trip to the harbor. 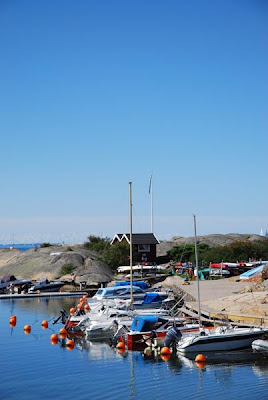 I also played with my nephew and went to see his school (he just started his second year). He's grown so much since I've seen him the last time.

Maybe I shouldn't wait four years until the next trip - but then, there's always the winter olympics in two years ...
Posted by Sapphire at 11:48 AM No comments:

And the Games Go On

I'll be off next week in Sweden visiting my sister and her family. And watching the olympics. Excessively. It's turining into a bit of a tradition, as we've did this four years ago. I was stitching on 'The Minstral' from Teresa Wentzler back then and finished it while I was there. My sister, courious, started with her own stitching project and the bug was passed on again ...

This year I'll be probably mostly knit, though I have a quilting kit I want to try and my sister has done quite some lovely quilting so far, so she may be able to give me a few pointers. But for TV watching I'll work an a new pair of socks and also bring my Aran Afghan project, to work on some more squares.

Yesterday I've finished the Lily of the Valley shawl and, gosh, it turned out beautifully. 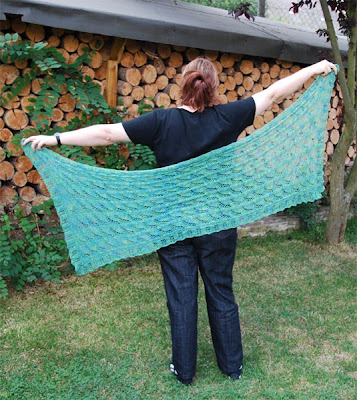 This picture was done pre-blocking (isn't is great how the shawl hides my big butt?)
I was a bit reluctant how the silk would block, but there was no reason to fear. It turned out great. I blocked the whole thing this morning and it got even more lovely then it was before. 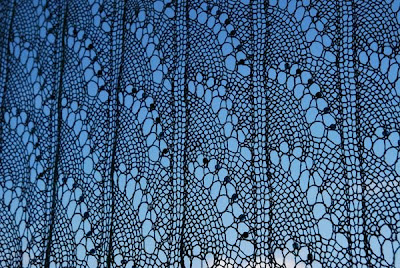 You see what I mean?

Last night was a lunar eclipse over Germany, so, of course I tried to capture is with me camera. The 300mm lens did get some cool pics. I did play around with exposure times a lot,

I did try to caputure the famous red glow, but was not as successful as I hoped I'd be.
That's the best I've got. 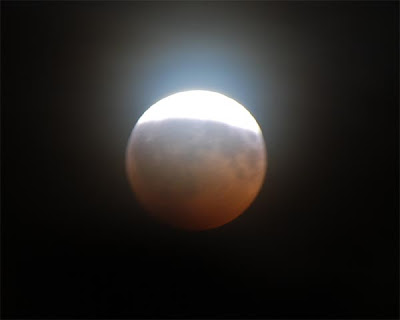 Yesterday was also our traditional BBQ in the Hundsrück. Looks who was there ... 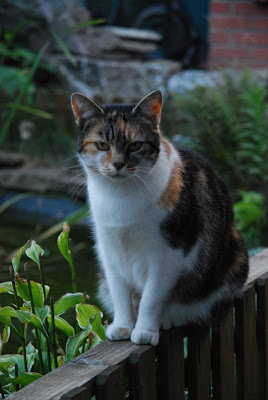 One World, One Dream

You may think about the olympic games in China whatever you want, but the opening cermony on Friday was pretty impressive. I took the afternoon off and watched it at my parents' place (it's more fun watching it in company) 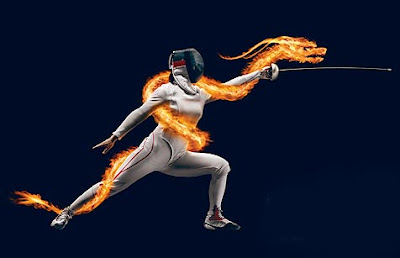 The show was (as I had expected) perfectly choreographied and executed. Loved the bit with the picture and how this picture progressed during the show and how they said the olympic oath on it after all the athlets had walked over it and added to it.
I always look forward to the parade of the nations. It's sometimes hard to remember where that country is located (and how they manage to find athlets to take part). Noticed how for many countries the banner carrier was a woman (like in the case of Iran, which really surprised me)?

For the next two weeks I will immerse myself in the games. I have to work next week, but the week after I'm off and I will drop by my sister's place in Sweden so we can watch together. It's a bit of a tradition, really, as I've been visiting her the last time four years ago during the games in Athen (and during that trip I managed to give her the stitching bug *grin*)

Yeah, I did finish my Japanese bag 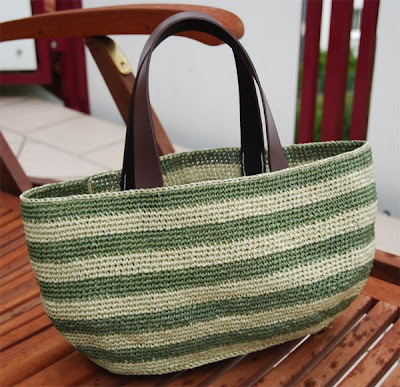 Still a bit smaller than I thought it would be, but quite usable for smaller stuff (like my knitting)
The leather handles came with the kit and I sewed them on by hand.
I still got some of the lighter green bast yarn left, but not so much of the darker one (not enough for aother stripe, that's sure) 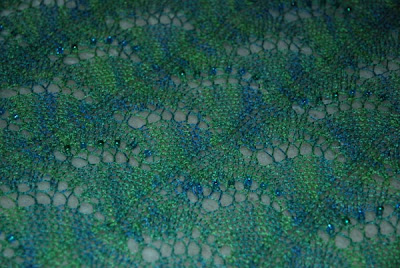 This is a good picture to show the pattern and the color (at least on my screen - your milage may vary). I'm making good progress and just switched over to my second (out of three) balls of yarn. I've got seven repeats of the pattern so far, the instructions said to go for ten. But I guess I'll be aiming for twelve at least, depending on how long the second ball takes me. The third ball I will use for the edging.
Posted by Sapphire at 5:07 PM 1 comment:

I've had three starts of the Japanese Bag kit.
First time I followed the pattern (well, at least I think I did - it's in japanese after all, but the chart looked pretty straight forward to me) and it was way too small.
Second time I started with a large base, but it got all wavy and not nice, so I ripped that one up as well. This is as far as I got with the third attempt. I'm halfway through the yarn and so far the size is okay. The base is still a bit uneven, but I guess (hope) it will smoothen out evenually.
Currently the whole thing is very boring, topped to the 'hard on the hands' bit. So the growth is slow.

Second live project is another shawl. I got a hand painted silk yarn in San Francsico in April (Kaalund Yarns - Enchanté --> I woudl add a link here, but their side is password protected. Never had this one before) and wanted to make a shawl of that ever since.
Here I'm also on my third start.
First was a pattern from the latest Big Girl Knits called the 'Perfection Wrap'. I lovely pattern that would work well with the yarn (it's originally written for SeaSilk), however the pattern is a bit on the boring side and the 'purl 2 through the backloop' stitch is a pain in the back so I did loose interest quickly.
Eventually, I decided to give it a new try using the Woodland Shawl pattern. I knitted about 10 cm (4 inches) but then decided that it doesn't work well for the silk. Maybe a yarn more sturdy for the lace definition would be better, and possible also a uni colored yarn, not a hand painted one.
Ripped-ti-ripp.
Third try was started this morning with a somewhat larger pattern (it has a 26 stitches by 28 rows repeat). Pattern is called Lily of the Valley shawl and can be found in Lace Style.
The pattern asks for tiny nubs in some places, but I'm replacing them with beads instead. Good thing I bought beads for this yarn *grin*
I've not pre-beaded the yarn, but instead you the crochet hook method and so far it works good. So far I've managed one repeat of the pattern and decided I like it.