Last year in July I bought an ipod. I used to have a different mp3 player before and was okay with it, but eventually I decided to upgrade and enter the world domination of Apple. Not that I don't like my ipod, I do and I love that I actually can play little movies, but what had put me off for the longest time was that for using an ipod, you also have to use itunes, which I was rather opposed before.
But what makes it all worth (at least to me) is that opportunity to download podcasts, and though I started rather late actually doing so, I'm now hooked.
(and, yes, I know, you don't really need itunes and an ipod to listening to podcasts ...)
It all started when I knew I had to spend 8 to 10 hours sitting in a plane on my flight to the US. There was a discussion on Ravelry at this time about the best knitting podcasts, and two which had been recommended were 'Electric Sheep' by Hoxton Handmade and 'Cast On'. 'Electric Sheep' is currently on episode 30 and 'Cast On' has a whooping 88 parts already. This is a lot. Though I listened to and enjoyed only two episodes of 'Cast On' so far, I'm now on episode 21 of 'Electric Sheep' and my plan is to keep on listing until I get them all.
Interesting enough, 'Electric Sheep' isn't so much about knitting. Hoxton Handmade usually starts out with an essay on whatever topic that comes to mind (something having something to do with knitting, but sometimes not) and then goes on things that caught her attention, may it be knit wise or not. She does have a lovely English accent, which is something I really enjoy listening to. She talks alot about what's currently going in and around London, and though I have no chance to go to all the places she recomments, I still enjoy hearing about it. There are clearly worse ways to spend have an hour knitting each week.

Speaking of knitting. I'm currently working on several things.
A) is a very popular scarf on Ravelry called 'Baktus'. The idea is to knit in plain garter stitch (every row is knitted), increasing on one side every fourth row. By the time you have knitted half your yarn (determined by weight) you start to decrease every fourth row, making sure that you pretty much use up all your yarn and have none, or rather little, of it left once you done. I think this is a brilliant idea as my stash of left over yarn is occupying a rather large box in my work room with no idea what to make with it. 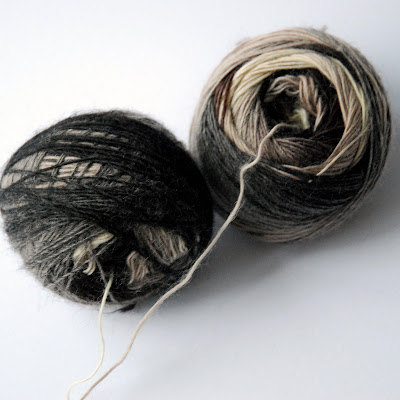 I'm using a Schoppel-Wolle Zauberball for this pattern, which I split in two smaller ball in order to make stripes. It doesn't quite work out as strippy as I'd hoped, as the dark colors and the light colors seem to like to group together, but after ripping the whole thing to that point once already, I decided not to care. I've just hit the half way point at 80 stitches and am now on the decreasing.

Project B is the 'Flower Trim Bag' from a little book I've bought in the US, 'Stitch Style Bags'. 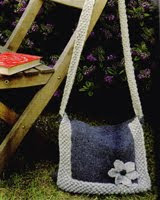 (that picture is ...ehr, borrowed from here)
I'm doing it in the recommened yarns and it's breezing along fabulously. Only downside, as this bag is not felted, I will need to line it somehow, and I'll need to find out how.
There are two more pattern in that book I really like.

Last, but not least, is a pair of socks I'm working on. I've knitted socks cuff down (my normal modus operanti), toe up, even sideways, but this is the first time I'm knitting one heel out. The pattern is called 'Hat Heel' and can be found here. 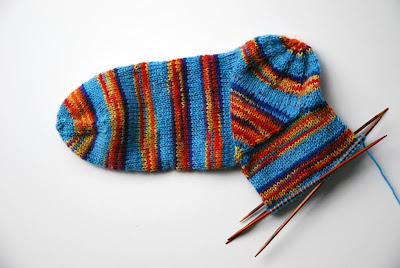 I actually finished the first sock, but then discovered that I misplaced my printout of the pattern, so I had to print it out once again.
It really is a very nice fit, and the bright, strippy yarn makes it look interesting.
Posted by Sapphire at 4:37 PM 1 comment:

I've been away to Florida for about a week. 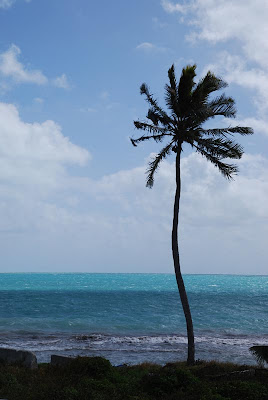 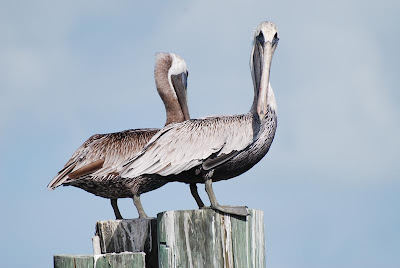 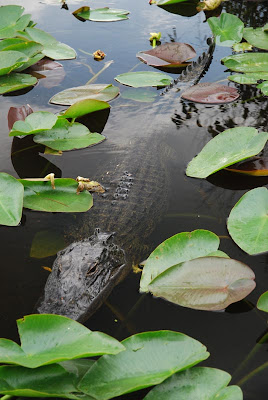 The space shuttle (Well, technically, I only saw the external tank and the boosters, but they promised me the orbiter is there as well....) 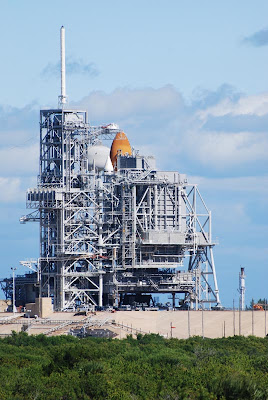 I did plan my vacation so I could see a shuttle launch, but then the launch was pushed out by a couple of days just to the day I was flying home. A well, at least I've tried...


I saw lots and lots of water 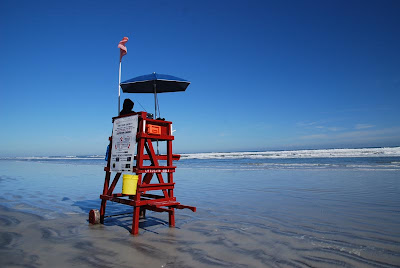 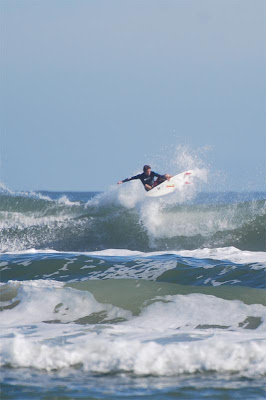 And, of course, I saw a lot more but there's just not enough space for it here.
Posted by Sapphire at 6:46 PM 1 comment:

One of my favorite yarn stores had a sale a couple of weeks back. I've managed to score a bit of yarn, though not enough to make myself a pullover, and not enough to make something fully in one color. The yarn, though, had a nice rustic look to it, and I really wanted to make a pullover for my nephew with it.
I decided to make the body in one color and the arms in another and just add a couple of green stripes to keep it interesting. I've got the measurements from my sister and then I started knitting. 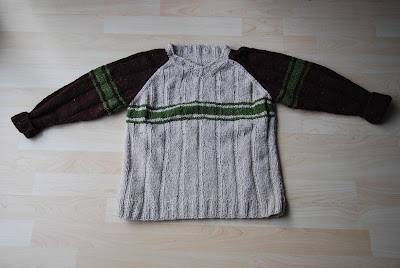 I'm quite happy with the outcome, really. The interesting question now is: will it fit?
I already know the arms are too long (that's after I already did the arm again taking out a good 3 inches in length), but I guess my nephew always can fold the cuffs over. 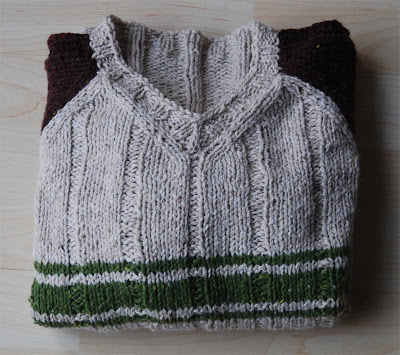 There's still enough yarn left to make a hat and a scarf.

Next Sunday there's a chance to see if it fits, as my sister and her family make a stop at Frankfurt airport on there way from South Africa to Sweden.

I'll be flying to Florida the same day, so I have to be at the airport only a few hours earlier to meet them. My parents are going to pick me up and give me a lift.

I'll be in Florida for about a week on vacation. I've never been there, so I'm really looking forward to it. I hoped - and planned my fights accordingly - to catch a shuttle launch, but last Friday I've found out they moved the launch window out a couple of days to the same day I'm flying back home, so no luck there. Ah well, at least I've tried.

There will be no blog for the next two Sunday, as I'll be without computer on my trip.
Posted by Sapphire at 5:43 PM No comments: