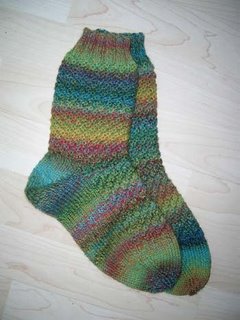 I'm in love with those socks. The pattern is a simply snowflake pattern I've found in a magazine, the wool is Admiral ombre from Schoppel Wolle. It was my second attmept on a boomerang heel, and it also worked fine.

And knitted some more

I've had some of the Schoppel wool left and always wanted to try entralac, so I started this. No idea what to do with it, it's more of a swatch than anything else, but I think it works very well with this wool, and maybe I'll find something for it.


And I also stitched some 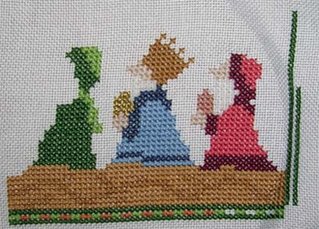 I was just looking for something simple I can carry around with me during the x-mas season, ad found this. I picked the pattern up at the Nadel & Faden in Osnabrück. Cute, easy (though I'm not looking forward to stitching the sky)

Merry Christmas to you all.
Posted by Sapphire at 9:10 AM No comments:

There's a Dragon in the Greenery 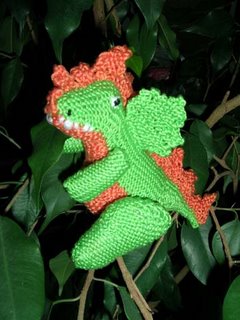 Last week I've linked to the new issue of Knitty and the cute little dragon that I found there. Well, here's what I've made of it. Not quite the same as the original, but still somehow cute. He's about half the size he should be, and the legs and the back ridge is bigger than it should be. And the tail is almost not there ...
Well, it was a first try and I'm sure to make another one.

Besides, I've decided to show an update on the Northern Lights Sampler

I'm about 2/3 done, I'd say. Currently I'm working on row 21. I've skipped row 17 for now, as I'll do all the beads in the end.
It's more or less my focus piece for home, that is if I'm not working on anything else - which happens a lot.

Yeah, I'm finally done with some Thunderbirds fic. First part is here. All in all there are 15 parts and if all goes well, I'll post one part per day.

One quote (of many possibles ... but I don't want to spoil too much)

McKay: …now is Sheppard still bugging you to let him use the ancient device to turn himself into some kind of superhero?
Weir: Oh Yes.
McKay: …despite the fact that the ancient database states that its effects on people are wildly unpredictable, and that I’m just lucky I wasn’t, er, instantly melted down into a pool of protoplasm?
Weir: Yes.
McKay: Well maybe, you should let him…
Weir: I think not.
Posted by Sapphire at 2:35 PM 1 comment:

Well, I didn't really plan on making x-mas cookies this year. When you try loosing weight it's not the best thing to have around. But then my mom came with crystalized orange peels and the request to make her beloved orange sticks from them (basically, cut the orange peels in stripes, then dip them in chocolade)
And as I already was in the kitchen and I was in the mood, I didn't stop there ... 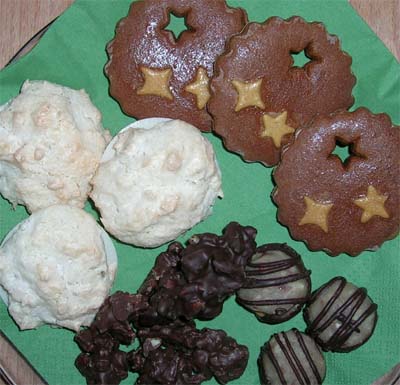 On the top are ginger bread rounds. Below of them are marzipane balls with chocolate (the balls have also some of the orange peel and pecan nuts in them). Left of those are burned almonds with more chocolade and last, but not least I've made some coconut clouds.

The ginger bread was an experiment, which I'm not so sure that it worked out. The marzipan balls are also an experiment, but they are actually pretty good (normally I make them with walnuts and tried apricots, but this version also works)


Yeah, a new knitty is out. Look at Noberta. Isn't she absolutely adorable? I've already bought some wool for her and start working on her asap.


Last Atlantis wasn't really that great (well, they can't really always hit the mark) - but the episode gets one bonus point for working in a reference to one of my favorite movies of all time: The Princess Pride....
Posted by Sapphire at 4:25 PM No comments:

Now that the recipient got her birthday present, I finally can show my latest happy dance off. 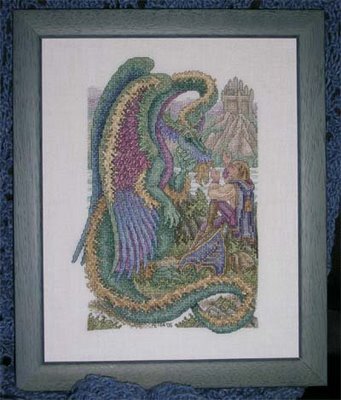 The Storyteller by Teresa Wentzler. I didn't stitch the border that went with it, but I can't say I miss it. I think I like it better this way.
Took me a couple of months, but, as usual with my stitching, there've been a couple of other project cutting in.

I'm down to one mayor stitching project, so I need to start thinking about what to do next *big grin*
Posted by Sapphire at 9:39 PM 3 comments: