Last week I finished a stitching project for a change.
Nefertiti - The Beauty of Egypt, a kit out of the Joandoor Collection by Lanarte. 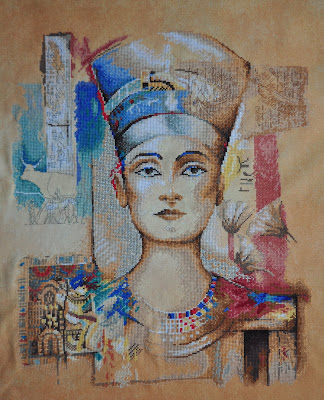 I stitched the matching King Tutankamum in 2007/2008 and plan on placing them next to each other in my guest room.
I worked on her on and of for a good 1 1/2 years. The reason it took so long is simply that I don't stitch that much any more, doing more knitting lately.
So, now all I have to do is visiting her in Berlin for real (I did see Tutankamum's mask many years ago, so Nefertiti's bust is sort of a must, now). Maybe next week on my day off if the weather is not too bad.
I'll let you know how it goes.
Posted by Sapphire at 2:29 PM 2 comments:

No, I haven't dropped off the face of the Earth. I'm still here and busy.

I have finished one project and started on two more. I've also done some more cross stitch on my 'Nefertiti' and am sooooo close to finish here.

Finished project are the socks for my mom (remember the blue-green-brown sock from the last post). I've added some liquid rubber dots on the soles so they are not so slippery and will hand them over to my mom next week when I see her.
(I could wait for her birthday, but that wouldn't be quite fair as it's cold right now and socks are needed to keep ones feet warm)

Cria also made some progress: 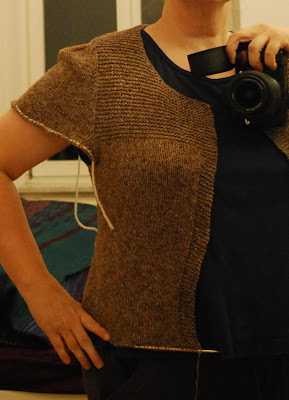 Actually, I by now finished the body part and started with the first sleeve. Still looking good and the fit is also good, though for the next time (and there might be a next time, as I really love this pattern) I would add some more stitches in the front, as it's a rather open cardigan.

I've started a new pair of socks with flowers in fair isle knitting. I call them 'Blumenwiese'.

I've also started a beaded cowl in malabrigo lace yarn which is sooooooooo soft. Pure joy to knit with.
Posted by Sapphire at 3:26 PM No comments:

With the big sock yarn blanket project out of the way I've got time again for other things (not that having a big project to work on normally would stop me from working on other projects, but for some reasons I was fairly monogamistic with the blanket, which is pretty unusual for me)

Anyway, since the sock yarn blanket is done, I've made not one but two pairs of wristwarmers. One pair I've got no photo handy, the other pair is here. The pattern is a freebie by Hanne Falkenberg, a danish designer. I got a copy of the pattern in my favorite yarn store in Dresden and had to cast on right away. Super fast knit and lovely end products.

Then I'm ready to tackle the replacement of my mom's favorite socks. I've made them in November 2007 and already got them back for repair once. This time though, I decided to knit the same socks again in another color. 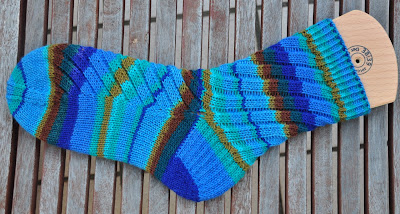 First one's done and it does fit, so I'm off onto the second one.

After my recent burst of Wollmeise aquicions I thought it might be a good idea to knit with some of it. Though, to be honest, I also would have liked to leave the skeins alone in their unearthly lovelyness. It's sort of a 'eating the cake / keeping the cake' thing.
Anyway, I cast on Spectra by Stephen West. The bluish yarn is the Wollmeise 100% Merino in the color Silberdistel (Silver Thistle), the other a skein of Noro Silk Garden Sock Yarn I happened to have in my stash. Love - LOVE - this combination. 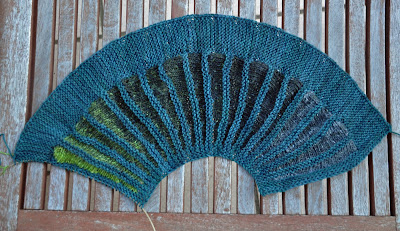 And, finally, I did cast an for Cria a lovely little cardigan by Ysolda out of her book 'Little Red In The City'. It's a top down cardigan with set-in arms, only you don't sew in the arms in the end, but knit them as you go. Simply brilliant. I'm not 100% sure on the yarn (Rowan Revive in the color basalt), though. To begin with, the gauge is way off, so I'm following the pattern for a much smaller size. Also, the yarn is pretty rough to knit with (though it does soften a lot once it's been washed). And it smells. And I'm not sure I have enough.
Ah well, I will see. 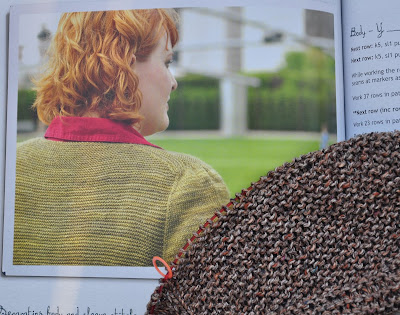 Posted by Sapphire at 4:33 PM No comments: