Quilting through the Yukon and British Columbia

I happened to stop by a few quilting stores on my way through Canada.
The first one I found is actually in Skagway, Alaska. The name is Quilt Alaska and holds a great selection of unique fabrics dedicated to the life up north. If you're ever on an Alaska cruise go there (I'm pretty sure all the cruise ships stop in Skagway ...) bring a fat wallet or a well covered credit card. I've seen many, many fabrics there I've never seen before.
In the end I narrowed it down to two kits, though, for sure I could have found a couple more. 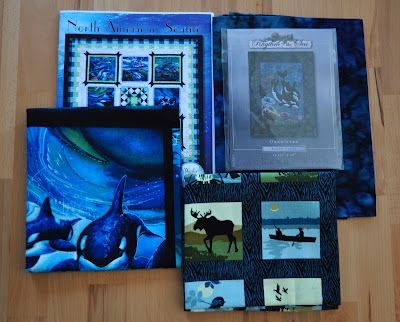 Psssst, they do ship world wide ...
When we went through Whitehorse the second time, we stopped at Bear Claw Quilts on 2nd Avenue. It's in the basement of a fairly plain builting, so we almost missed it. They did have a couple of lovely stained glass style quilt kits, but I didn't get any. I only picked up some gradient sets and a fat quarter or two, but nothing special.

Next one up is Kathy's Quilt Shop in Prince George. This was more the standard fair, but super nice people there and I spent a happy half hour digging through the scrap bin filling a little plastic bag with scraps. 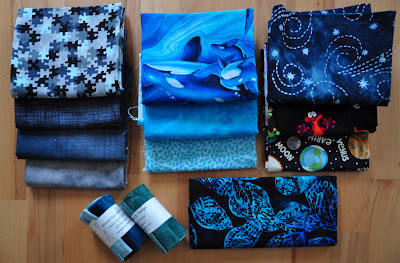 (btw, the fabric photos are from all over the place ... for some I don't even know anymore where I got them from)

The smallest shop we found in Quesnel - Amelia's Cottons for Quilts. I know I picked up some black and white fabrics there (though not all of them)

Vancouver, of course, also has a quilt store (and probably more than one). The one we went to was the Cloth Shop on Granville Island. Fairly standard fair, but a pretty good selection of it. 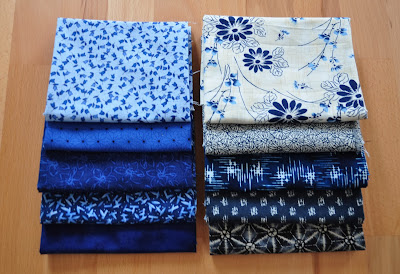 Last, but not least was Satin Moon in Victoria on Vancouver Island. They, again went more Northern style and had also a selection of great original pattern and kits.

All in all, I could have spent much more money in any of those shops, but due to luggage limits I did hold back (and the fact that I already have too much stash already at home, which I should use up first)

Back home, I made this quick pillow from strippy scraps I had lying around. I didn't use a pattern, but pretty much copied from memory a pillow I saw in Kathy's Quilt Shop. 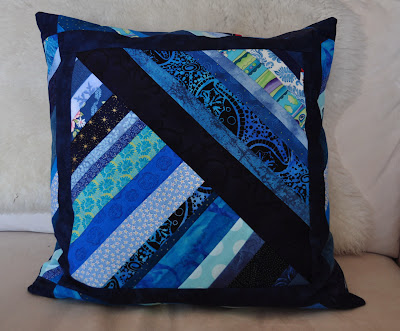 Posted by Sapphire at 2:57 PM No comments:

Just a couple of random pictures from the trip to Canada.
First one is the RV we had for the trip. This pic pretty much sums up the way most of our vacation was - some clouds, but also some sun; fall foliage, though not in the vivid reds of the East Coast; and, of course our home for the first two weeks. 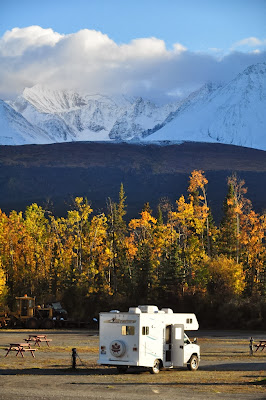 This is the bridge at Teslin, the longest bridge on the Alaska Highway. 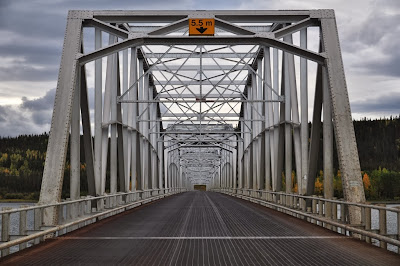 One of several pictures I took at the Sign Post Forest at Watson Lake. With over 70.000 signs, one could look around for hours. 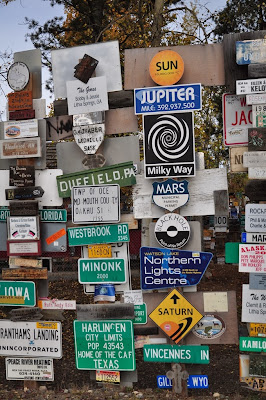 Hyder in Alaska. When we went out there after spending a night across the border in Steward, we actually hoped to see some bears. Instead we saw an absolute calm ocean shrouded in fog and with sureal reflections on the water. 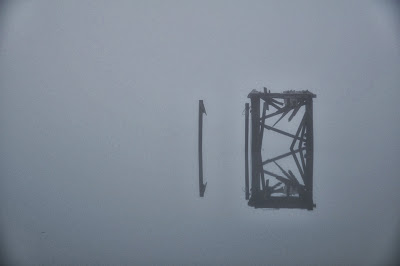 One drawback of clear nights is that - even though it was just September - we had temperatures well below freezing some nights. Ah well, perfect sunny days more than made up for this. 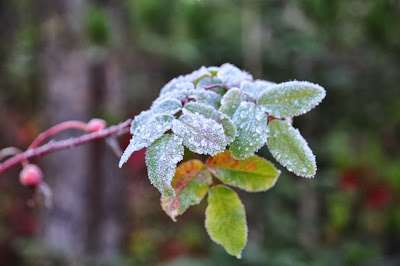 A gas station on the water - not something you see every day. That is, unless you live in Vancouver. Then you simply might pull your seaplane over to fill up there. 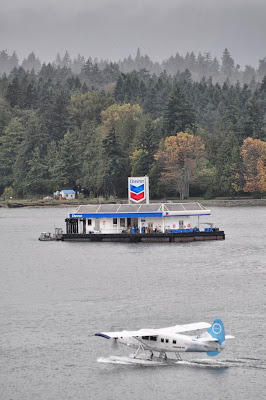 Posted by Sapphire at 8:47 AM No comments: 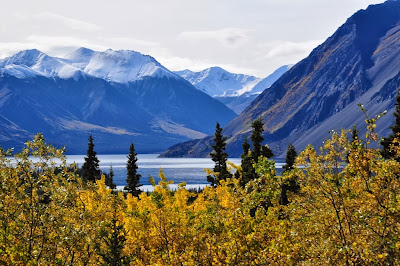 As we got fantastic weather in Hanies Junction we decided to splurge and took a flightseeing tour. Worth every effing cent!!! 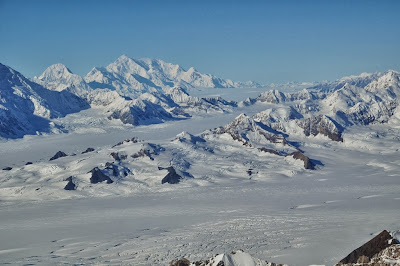 We did have quite a bit of rain on our trip, but we also had quite a few fantastic rainbows. This one I photographed in Watson Lake. 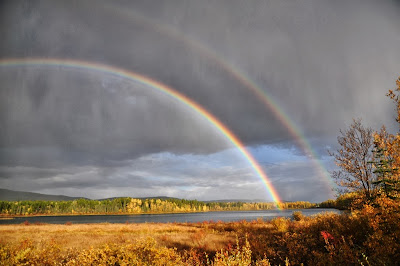 We DID have nice weather on occations, and no wind sometimes, and if we happened to drive by a lake, something like this was taken a picture of. 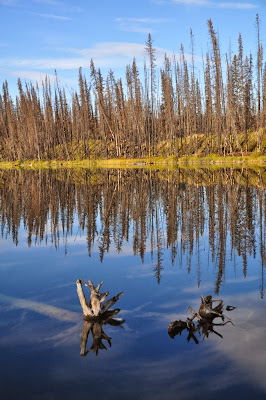 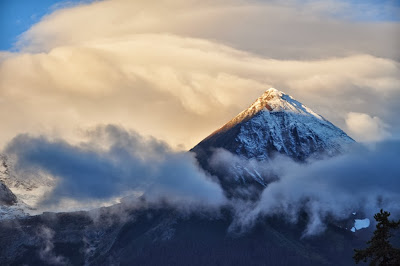 And on Vancouver Island, a look over to the Olympic Peninsula over on the US side. 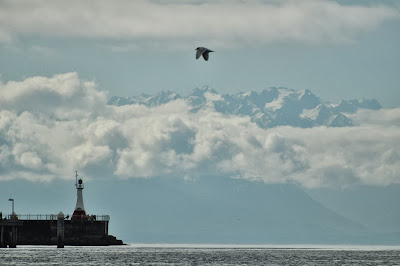 Posted by Sapphire at 4:06 PM No comments:

So, I'm back from vacation. I've been running around (first with an RV than with car) in Western Canada, taking a trip from Whitehorse in the Yukon Territories down to Vancouver and Vancouver Island.

We didn't see much animals this time round, only a pair of bears (a mother with her cub), some eagles (in the wild and in a captivity (due to injury) but no moose or elk.
We spotted the grizzly with her cub and the eagle in Haines, Alaska (which is accessible by road from Whitehorse) 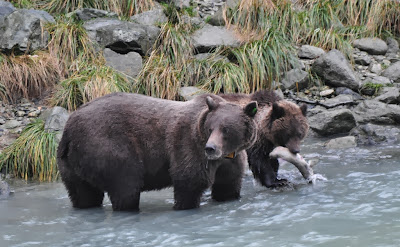 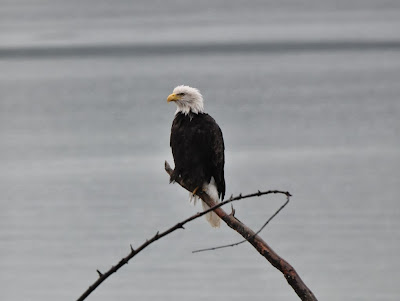 We saw this fellow in the Bloedel Conservatory in Vancouver, where he and some friends of his were flying around in a plexiglass triodetic dome consists of 1,490 acriylic glass bubbles. 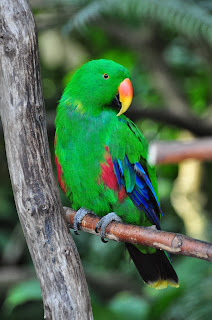 Posted by Sapphire at 3:49 PM No comments: