Gloves Are The New Socks

Last year around this time I was churning out socks like there was no tomorrow. I guess I had a feeling the winter would be long and cold and in the end I was rather glad I had all those socks to keep my feet warm.

This year it's gloves. I'm on my third pair and have at least one more in the pipeline. The first pair were really wrist warmers, but, hey, they're there to keep my hands warm, so I think they count.
The second pair are the Ringwood gloves: 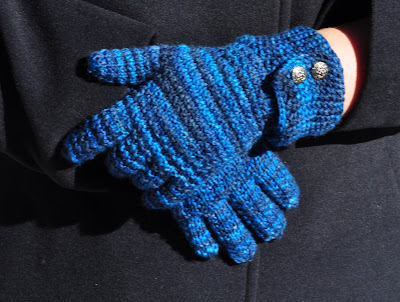 The yarn is some Cherry Tree Hill Supersock yarn I've bought in Florida last year. I've used only about half the skein, so maybe I'll make something else with it (it should be enough for at least one pair of wrist warmers ...)
The pattern is from the lastest Knitty and when I saw it (the pattern) I knew I had to make them. It is a surprisingly easy knit and it took me only about two days.
Speaking of Knitty; this new issue is great. The one before was a bit on the bla side of things and the only thing I wanted to knit (and did knit) was the Coquille shawl (and that pattern only showed up as a surprise pattern a few months after the original issue was puplished)

The new issue, now, I have already faved about seven pattern, and though I don't know if I really will knit them all, they are definitly on my list if I'm looking for something in that area.

First one is Eileen, a lovely, lacey cardigan with clear, simple, none-frilly lines. It looks like a nice, every day cardigan, which would work great with what I like to wear.

Pretty Maids looks like a cool lace shawl. I love to knit lace, but to be honest I don't usually wear them. So this is more something I would like to make, but propably won't as I don't know what to do with it once it's done. One the other hand, I might just take the lace pattern and make a scarf from it ... this might work.

Eleanor is another one that looks cool, and a cowl is currently a very 'in' item to have. For this I would need the perfect yarn, though, something with cashmir or like that, just something übersoft.

Brumbles seems to be a cool hat. I imagine it would be nice together with a matching scarf with the same cable pattern as the hat's edge.

Another hat I like would be Spry. This has the advantage that I would have the perfect yarn in my stash already, so I'm rather tempted.

I also love the two sock pattern in that issue (Riff and Nemesis) and could imagine knitting them both. Even Kilravock would work for me. That is if I wanted to knit some knee length socks. Which, if this winter turns out as cold as the last one, might be a posibility.

So, all in all, a really good issue with many possibilies.

Until I get around to knit those, I've made one little addition to my household. Last weekend I went to see 'Despicable Me' and I loved it. Leaving the theater I knew I had to make myself one of the minions from the movie. They are sooooooo cute. I love them. So I present you 100 (so named because he's my 100th project I've posted on Ravelry) 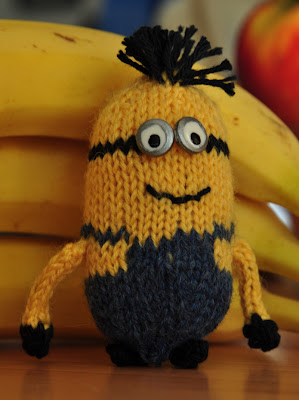